Shilpa Shetty Replaced Republic With Freedom And Got Trolled Savagely

After a disastrous 2020 that brought roughly the worst year that there was. 2021 brought in it wakes a new day and a beautiful year ahead. Today is the 26th of January, India stepped into it’s 72nd Republic day. It has been 72 long years since the Constitution of India came into effect for the first time.

Regarding today’s significance, yoga connoisseur and Bollywood actress took to the social media platform to wish all her friends, family and her long loving extended fanbase a very happy republic day. But, things did not work out as planned as the actress got confused between ‘ganatantra’ (republic) with ‘swatantra’ (freedom) and ended up using the wrong word. 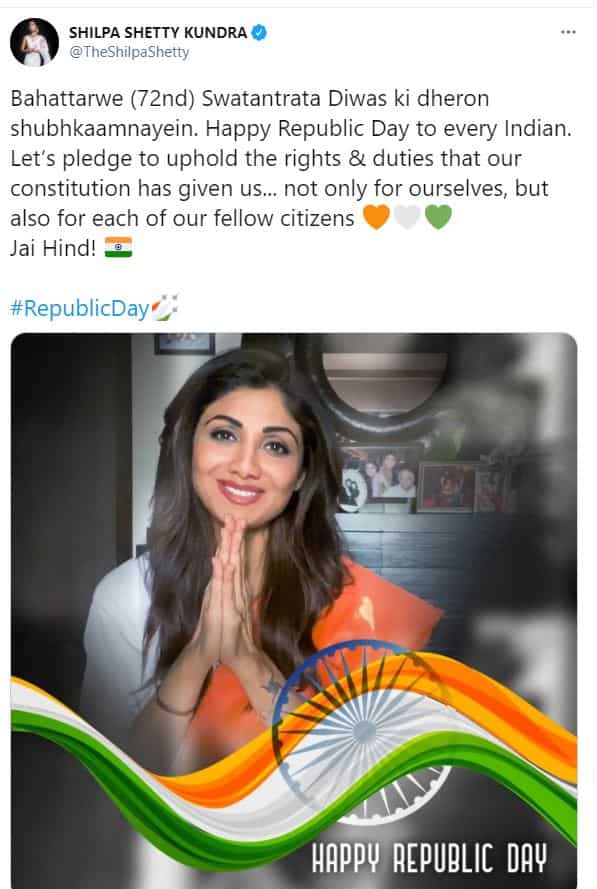 Even though the actress was quick to make the necessary change, the trolls and meme lords always picked up on the scent and started spreading it out.

Soon the memes started pouring in, here are a few.

The ‘Tiranga’ was hoisted and paid homage to in regards to the 72nd Republic Day at Delhi’s Rajpath today. The ceremony was conducted in the presence of high-level dignitaries such as President Ram Nath Kovind, Prime Minister Narendra Modi, Vice-President Venkaiah Naidu and Defence Minister Rajnath Singh.

Republic Day 2021 will have a representation of a few scenes as a form of tableaux. An all total of 32 scenes would be represented which includes 17 of various states and UTs, nine of ministries and six from the defence arm. In these portrayals, a few would be added for the first time. For example, Union Territory created in 2019 after the Jammu and Kashmir bifurcation that was done and also the scene of Ladakh.

However, due to the present of Coronavirus still, there would be a few changes. The audience number has been brought down to 25000 from previous year 1.5 lakh. The regular bravery awards that are presented to children have been eliminated. Due go the protocols of social distancing the match past number has also been reduced to 96 from 144.

All in all, this would be Republic Day celebrated in small but great measures.