Nepotism and the whole concept of it is one of most trending at today’s age. The debate mostly revolves around Bollywood, however, it has also traced its roots in the world of cricket. Rohan Gavaskar has been one of such former Indian cricketer who has faced innumerous number of critisism and trolls. But the positive note is that he has been successfully dodging all the negative engagements and knows how to perfectly deal with the haters.

Rohan Gavaskar hasn’t played for the national side much, although he is quite renowned in the domestic circuit. Even though he has earned himself a decent name in the game, yet he becomes the target of trollers as he couldn’t be as successful as his father, the legendary Sunil Gavaskar was. Nowadays, Rohan’s engagement has been mostly in the role of a commentator in the national and international circuit. Presently, he is serving the same in the Road Safety World Series, which began on 5th March. 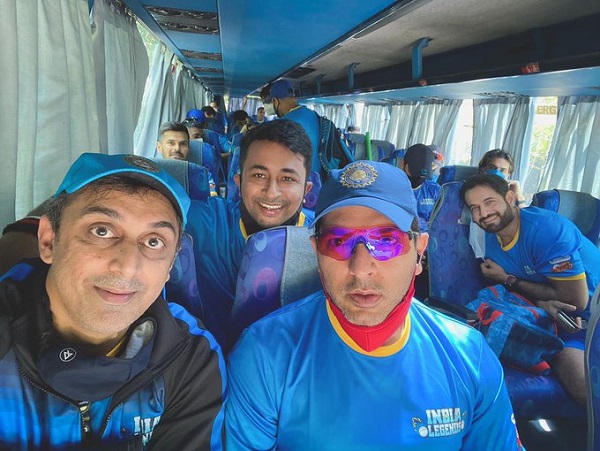 The 45 year old cricketer in relation to the tournament posted a photo with the India Legends. However, as soon as he made the post, a significant number of troller targetted him. Out of the many, one said that he got to be a part of the team due to his father’s prestigious name and not his own talent.

Upon seeing the comment, Rohan responded and asked the troller whether he got admission in his school in the same manner. He tweeted, “Is that how you got into your school? Shrek is a good name btw.” 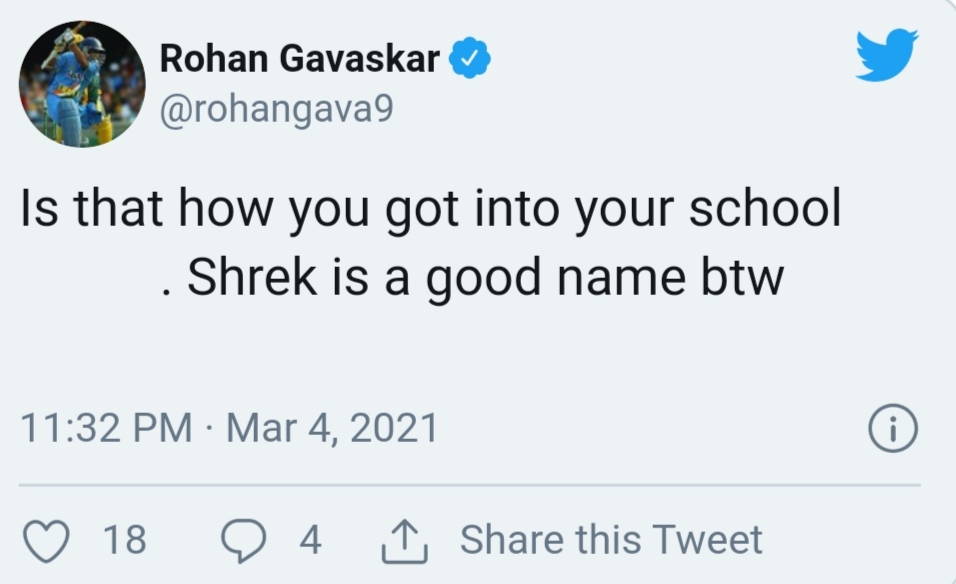 Rohan staunchly came forward and cut the troller by highlighting his unchecked facts. Despite that, the troller did not stop and further questioned that if Rohan isn’t a part of the game, then for what reason he had their jersey on? According to him, if he is commentating, then how far is it to take sides in the game? At the end, the troller also wrote that he feels sorry for Sunil Gavaskar, his father.

Rohan slammed the troller and cleared that he is a part of the support staff and is not a player of the team. Further taking a jibe at him, Rohan wrote that he feels sorry for his parents as when they will come to know how their son takes out his own frustration by trolling other people, they will not be proud. 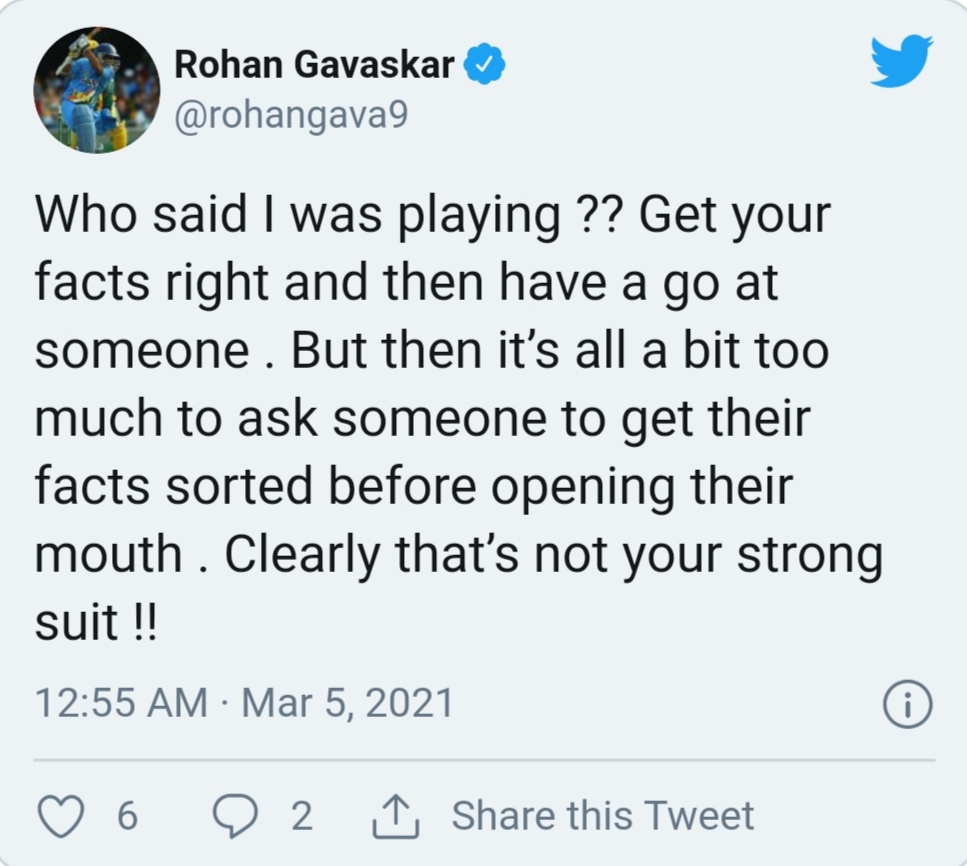 This is what he wrote: “Erm, no!! I’m part of the support staff. Again, get your facts right. Don’t jump to conclusions. I feel sorry for your parents too. Imagine how they must feel knowing their son is a troll. It must be a real let down for them. Their son removing his frustrations by trolling.” 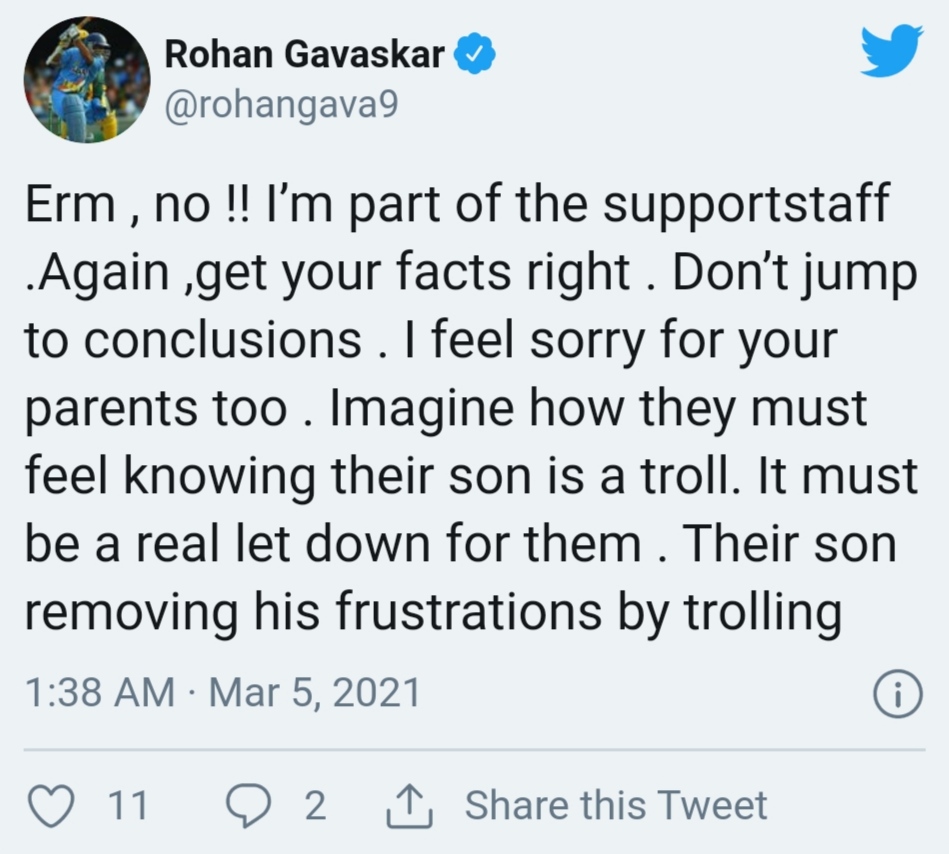 After getting bashed by the domestic cricket star, the trolled not only deleted all his tweets but also deleted his account. Rohan Gavaskar, undoubtedly handled this troller with ease and swag.