It has been a known fact that women love shopping and even men enjoy buying themselves things. But, when the latter are brought along in the shopping trails, they tend to get bored and their condition gets worse every passing second. Here’s a look at 20 such pictures which put this to display and were clicked at the right time.

Letting out the creativity 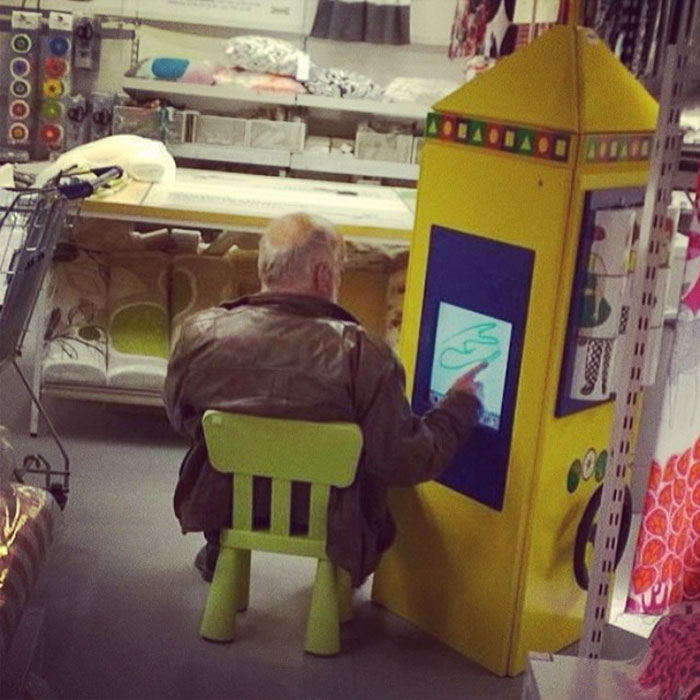 The man shown in the picture, bored of sitting idle while his mistress shopped her heart out, decided to channel out his inner artist while fiddling around with small touch screen close by while resting on the chair. 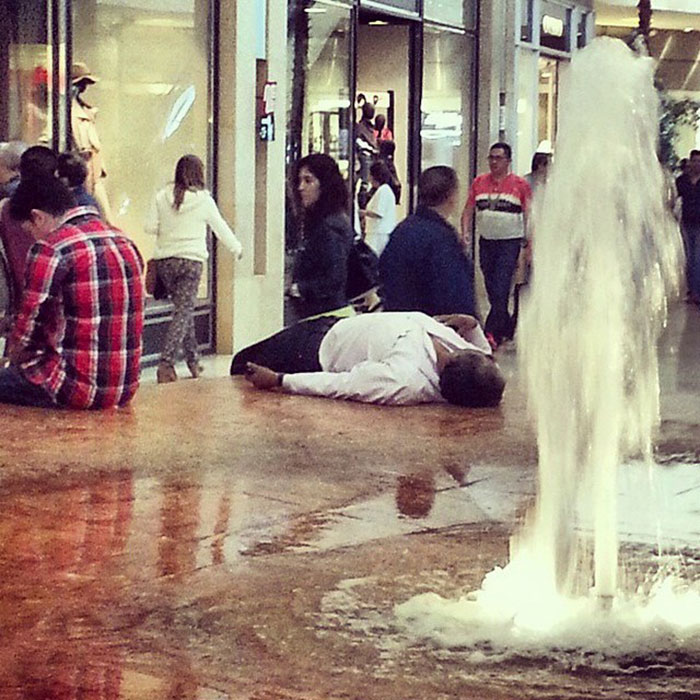 In the frame is the wise man who could not take the load of waiting for the long hours in the mall, and he finally decided to lie down where he could find a spot and fell asleep in no time.

Resting on the table 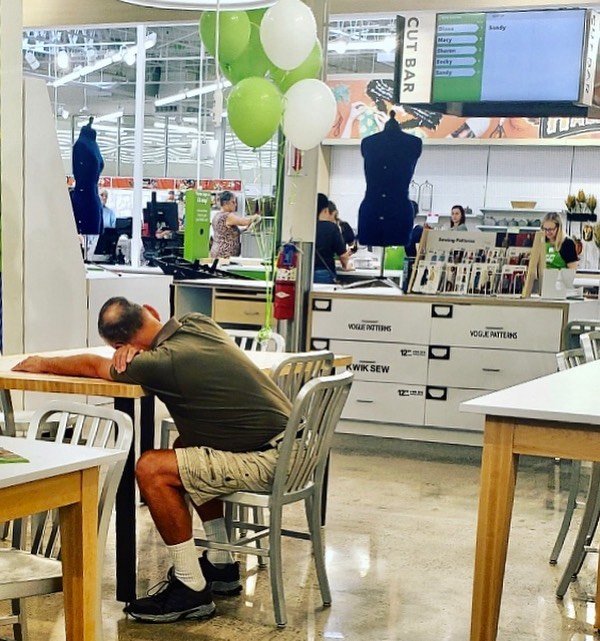 Napping on the table used to be a thing that everyone loved to do in school but the gentleman in the frame this time around decided to live that time again as he fell asleep on the table visibly waiting for someone in the mall.

A train of waiting heads Sitting around, helping each other platonically, passing time hand in hand are these men captured sitting around on a ledge, bored and tired as their wives and better halves must be walking around from counter to counter with stars in their eyes. 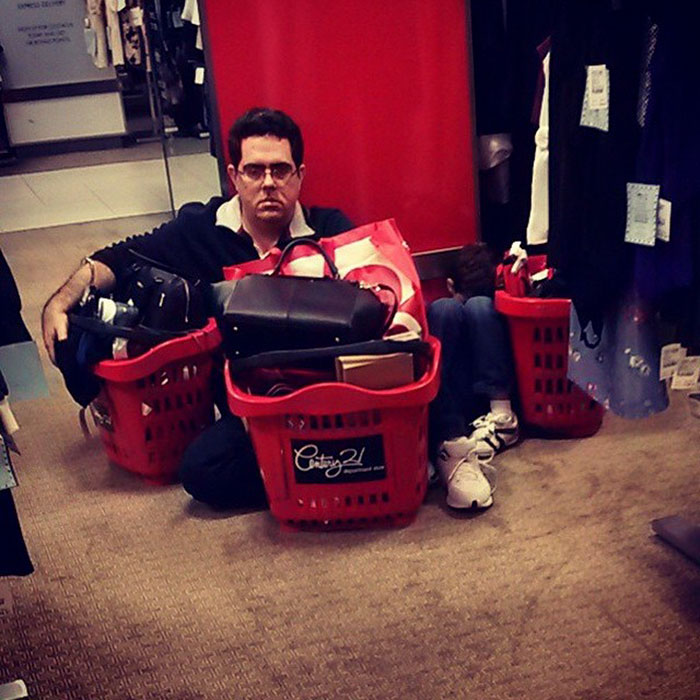 Many dads while spending time with their children, especially sons, try to teach them things that otherwise they may not learn in their lives otherwise. But this man in the picture can be seen giving an early lesson of patience to his son.

Hanging around on the stairs 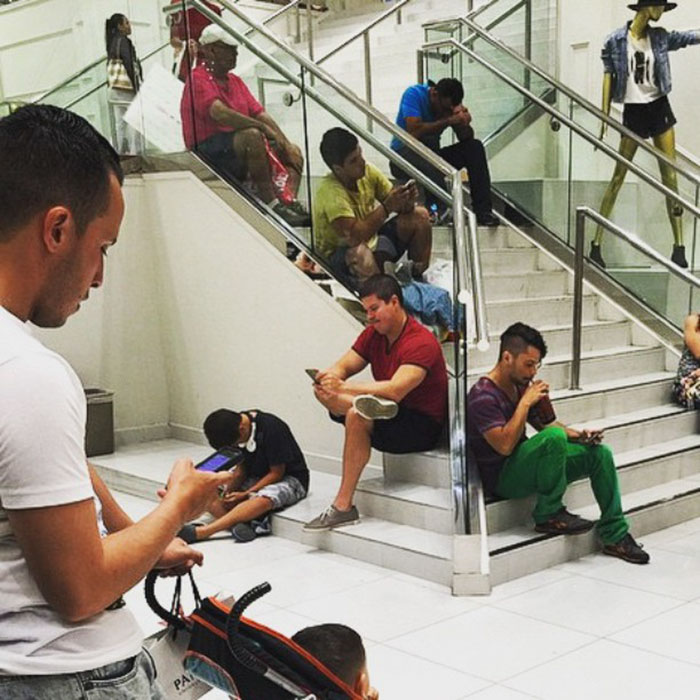 As it can be seen this group of men, waiting for their female companions who must be on a shopping spree came around to get together on the staircase and sit around in a group waiting for them to return.

Hitting a cosy spot on the couch 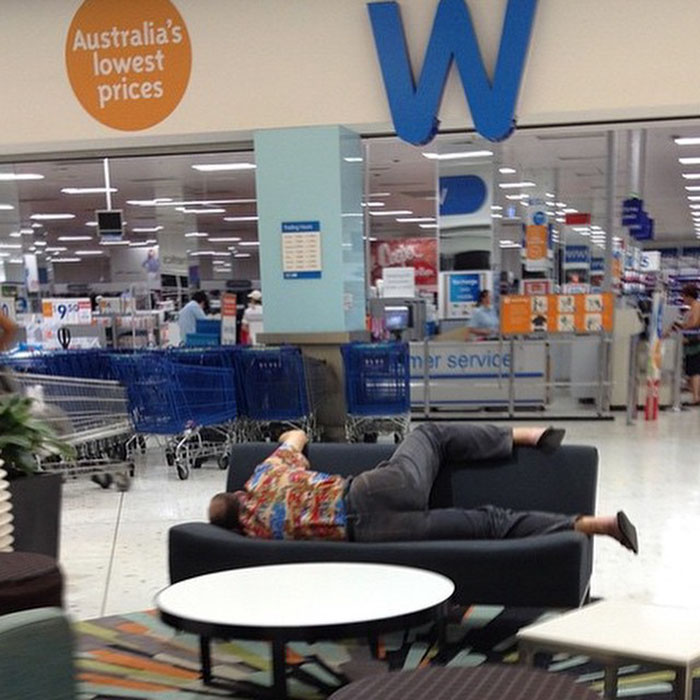 While many men were seen sitting out and hanging around in other ways, but this very gentleman decided to let out all his inhibitions and found the best spot on the couch to catch a shut-eye.

Passed out in the wait 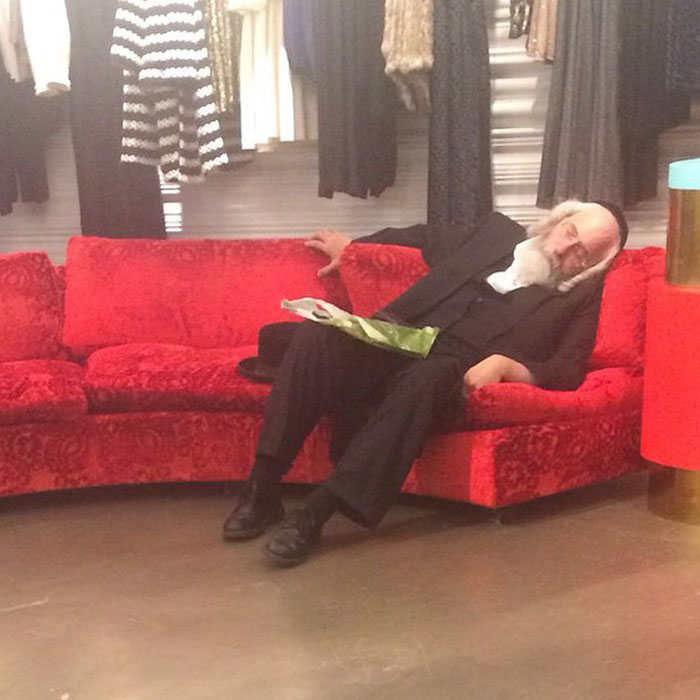 This very elderly individual, as it happened eventually could not stand the test of time as he passed out, as the goddess of sleep blessed him during the long drawn wait.

Yawning away the boredom 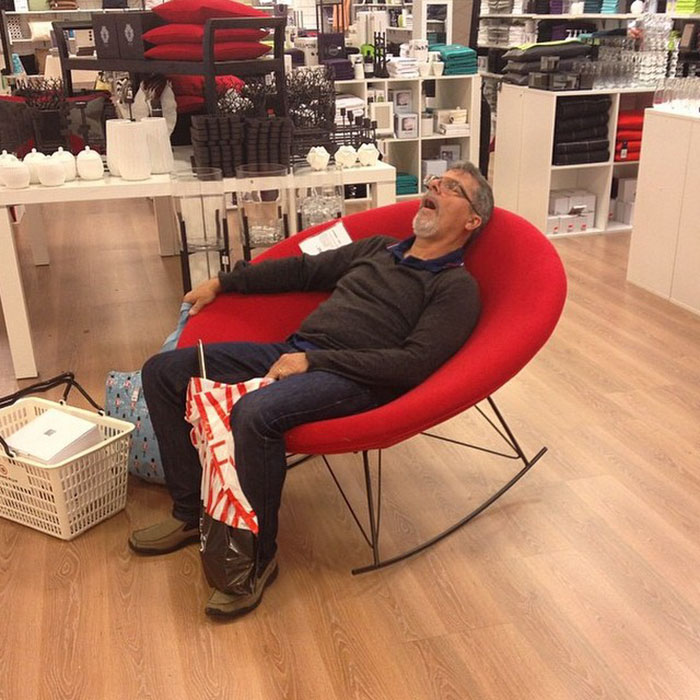 It is not uncommon as we have seen earlier that men tend to set themselves comfortably on the furniture on display in stores and the man clicked in this photo was yawning away while sitting there and in the meantime, showing the best usage for the marketers to use.

They aged well after they got here 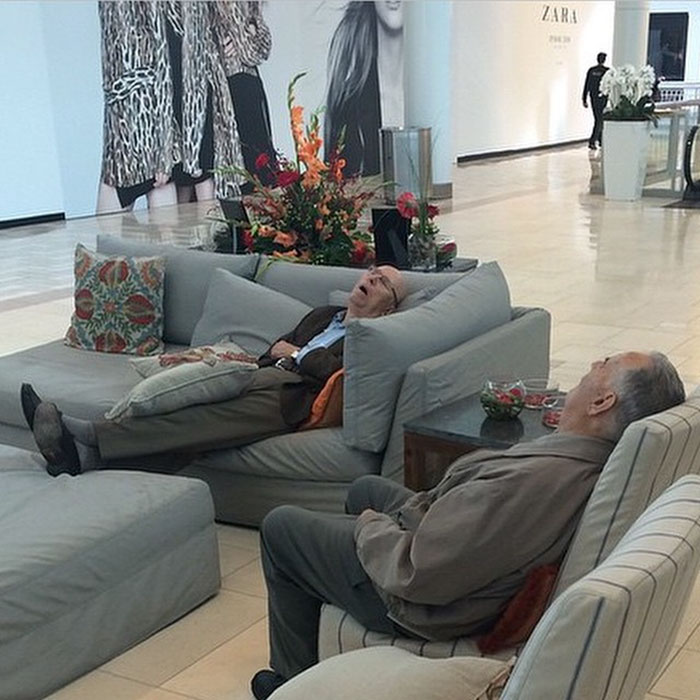 These two elderly men, as the legend says were young gentlemen when they set foot in this store, and as they slept they were left there as time passed on and on and on. 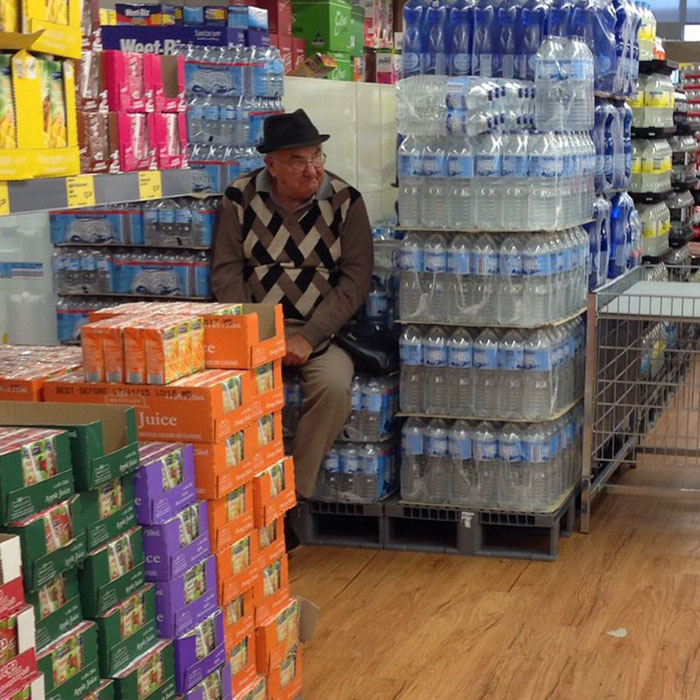 There could not have been a better example of the phrase that has gripped the lips of everyone over the years. And, older men are wise and when the two are put together, these things come along.

It’s been a long day, without you my friend 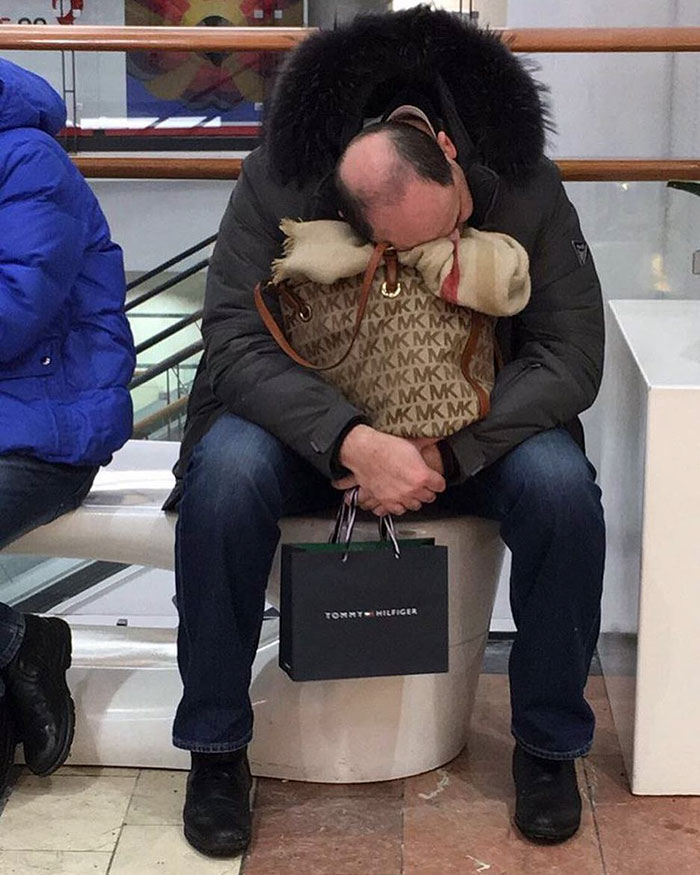 Sitting along without any company while the credit card cash is being converted into items of the show, can be a really gruelling task. And this person found his best friend to be the bag that he had with him as he rested his head on it and caught up on some sleep.

Sticking together on the stair 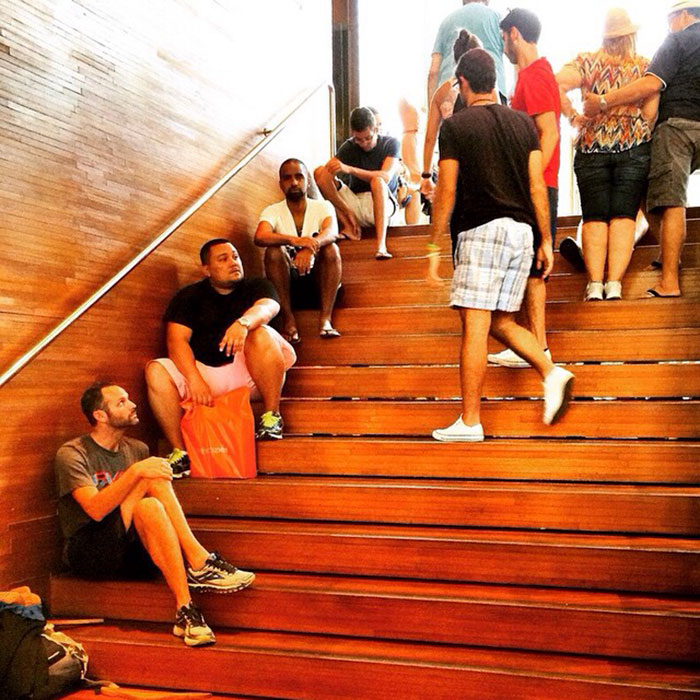 As seen earlier we have another group of men deciding to stick together on the stairs and help each other pass through these tough times.

Maintaining the chivalry, but sleep is important 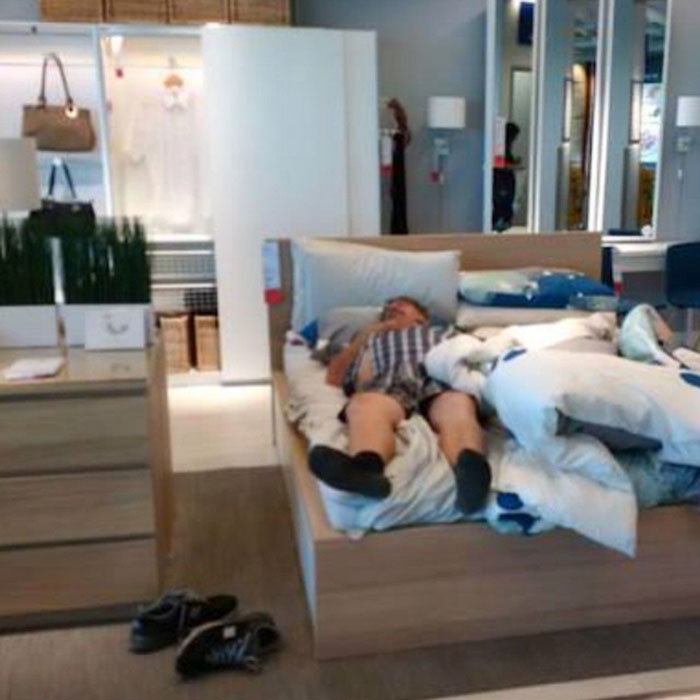 Being woken up in the middle of a good nap and being dragged to the mall, while still in sleep may have been the case with this person, as he decided that it was the best choice to take a nap at the display bed.

You are hot stuff on the lap 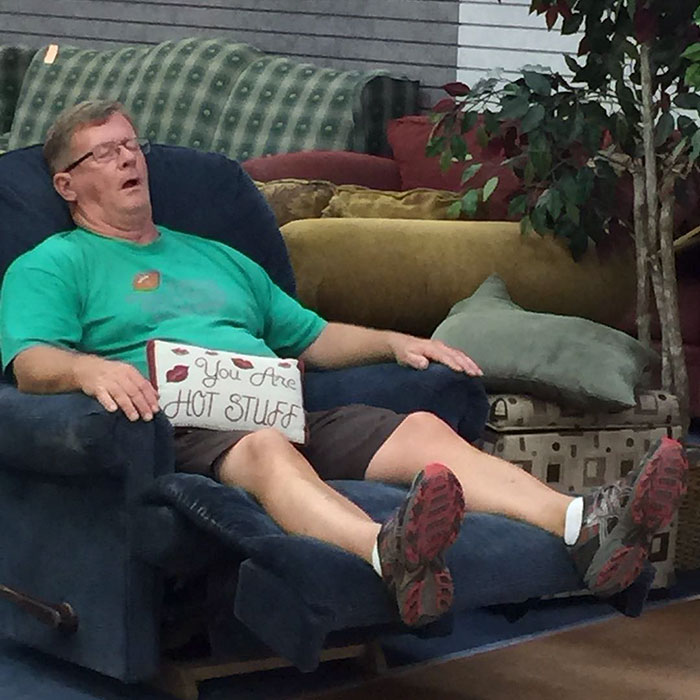 This picture needs no description as the visuals say it all. With the cushion on his crotch, the fine sir was sleeping away his boredom.

Cuddling on the dais 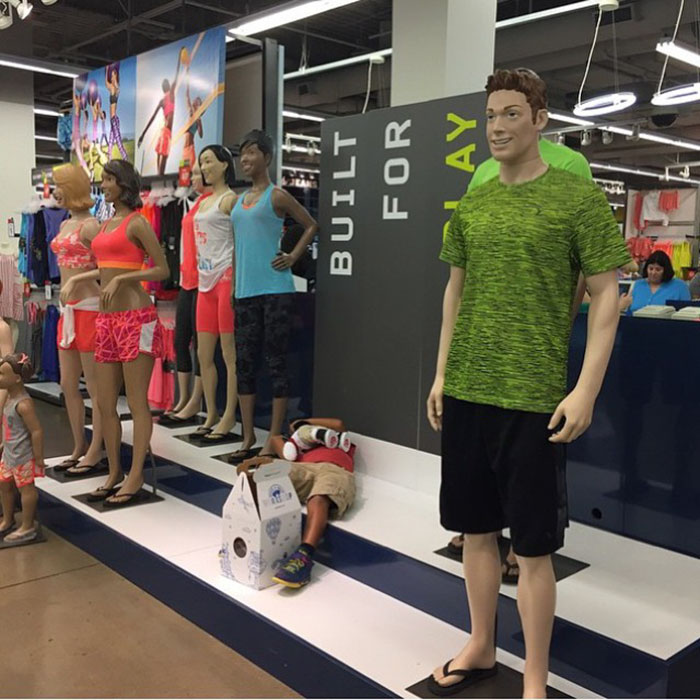 Sleeping with the stuffed toy that you love the most is one of the most blissful experience any person can have, and the man in this picture decided to relive the experience right there and then.

Despair on the face 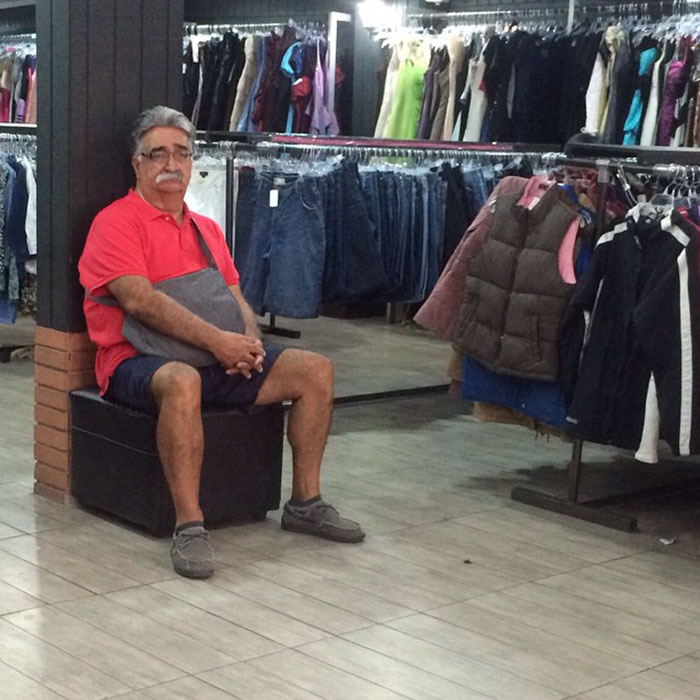 Paying for the things that you buy recklessly is one of the most difficult things that is to be done. And, it seems like at the billing counter, it was his card that was being swiped and punched in.

Staring into the void 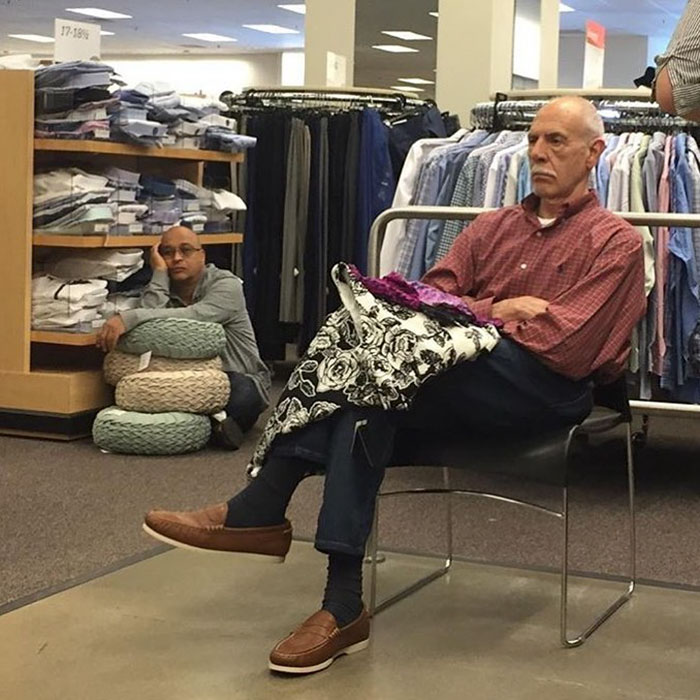 The two miserable men, sitting on completely different places can be seen sitting on places but are united in spirit as they are staring into the void of boredom. 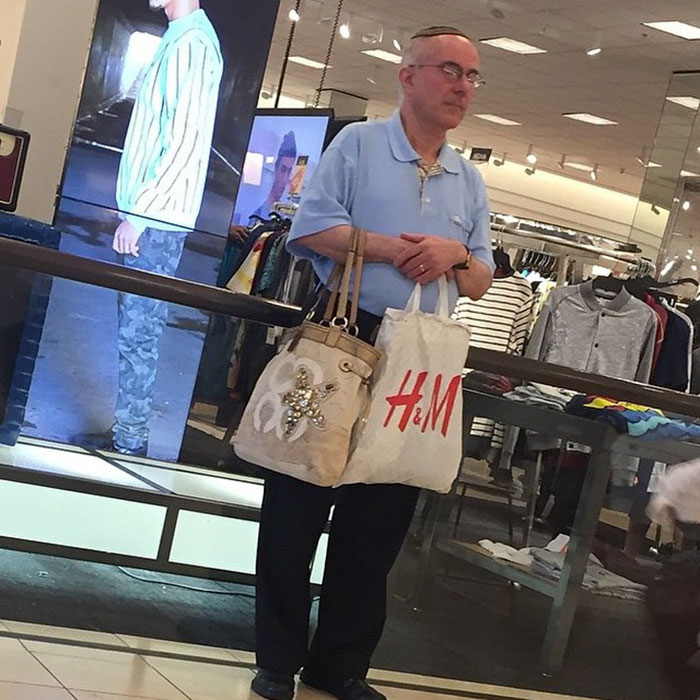 The gentleman in this picture seems to have been through this process for so many times that he has now trained his body to grab a moment of peace while standing. 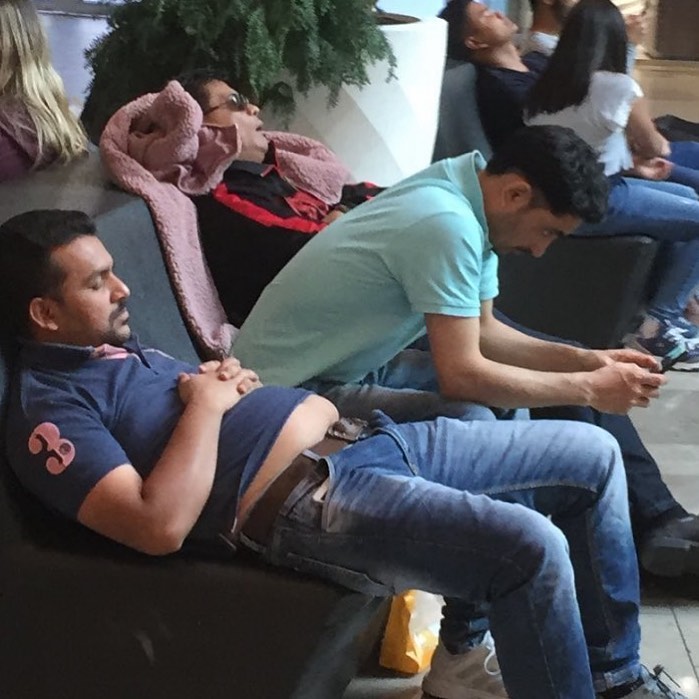 Drowsing to the talks of your lady is one of the most dangerous adventures that a man can indulge into and in this picture, in the background, there is one gentleman with a lady sitting next to him managed to fall asleep.