Neha Kakkar, Bollywood’s famous singer recently on the 24 October tied the knot with the love of her life Rohanpreet Singh. The couple first met together while shooting for their song ‘Nehru De Vyah and soon after got together. Their fans were already gushing over them when they went official and soon went ahead to declare the date of their betrothal. Soon after this on the 24th, the couple got hitched amidst a big celebration with family and friends and left for a fabulous honeymoon to Dubai. 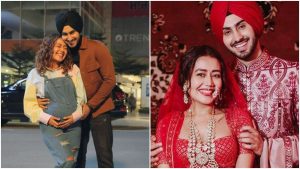 Two months later, the dinger duo Neha Kakkar and Rohanpreet Singh, posted a picture on Instagram which very prominently shows Neha’s baby bump, and rumour is it that Neha is soon to be a mother. The picture was posted with the caption “#KheyalRakhaKar” which translated to, do take care, which seems like a direct dedication to her husband. 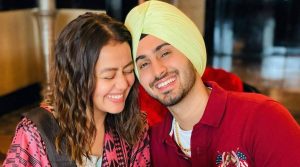 It did not take much time for the picture to go viral and twitter is thus currently going crazy thinking about it. The congratulations started pouring in and people started wishing them a happy life together. But, there were also a few who are guessing that this might be in the source of a new song that they are to release. Even though Neha is 6 years older to Rohanpreety, this never was a bother to the couple. Neha, moreover in an interview had said, “Rohanpreet’s first impression on me was that he was good to everyone on set. And he is the cutest of all boys I have met till date. The attraction was very strong. I think in the initial moments I felt that they were made for me”.

Let us thus take a look at a few Twitter reactions where the news was spread pretty creatively, that might just make you laugh:

This is quite funny when you equate the scenario of them both being in the same soup.

Fans got quite fiesty , quite soon, as they could not keep the news down well. This came too fast for all to see.

How it Started…. How it Going… pic.twitter.com/CsEtqXi7y8

Neha kakkar is famous for remixes but
I hope this one will gonna be her original.#NehaKakkar #RohanpreetSingh pic.twitter.com/SsKAiOABAe

People always make do with fun even in the toughest times. But if the rumour is to be believed, we really do wish the duo an amazing and blessed life ahead.