Former Pakistani cricketer Shahid Afridi was known as the game-changer of the match during his cricketing career. For the same reason, many people used to address him as “Boom Boom”.

Despite saying goodbye to cricket quite a lot of times and then returning to the game, his career lasted for many decades, including 99 T20 Internationals, 398 ODIs, and 27 Tests.

He was the captain of Pakistan cricket for quite a long time. He represented his country in 38 ODI games but played just one Test as captain. He also served as captain for 43 T20Is, the highest ever by a Pakistani captain in this format of the game.

Not only in Pakistan, but he also has a fan following across the globe. Even in India, which is the fiercest opponent of Pakistan, he is having a considerable fan following.

However, Shahid Afridi is not only known for his astonishing performances and surprising comebacks from retirement, but he is also known for his controversial remarks. He has made several controversial statements over the years which caused him a lot of trouble in past. From his controversial statements on Kashmir to his reaction to his daughter seeing Indian shows, he is also known for his anti-India and anti-Hindu remarks Despite facing so much criticism, he never said sorry for his incorrigible behavior.

In Asia Cup 2022, something strange happened that grabbed everyone’s attention.

Shahid Afridi’s daughter was spotted waving the Indian flag during the match which left many Indians and Pakistanis surprised. And just like that, it became a hot topic of conversation in both countries.  While Indians praised Afridi for this, on the other hand, people from his own country declared him an opportunist and an attention seeker. 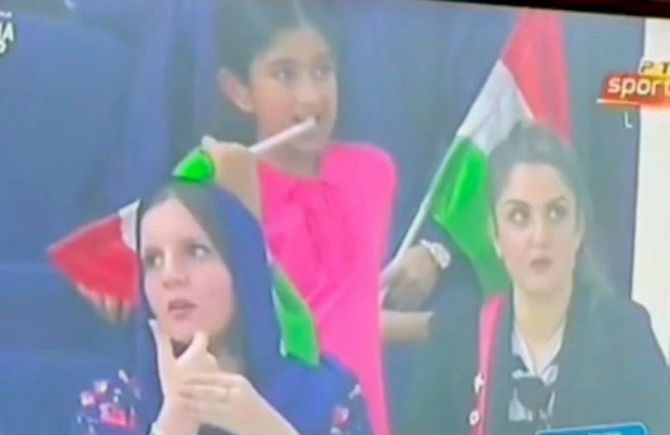 Shahid Afridi Accepted that his daughter was waving the Indian flag

During Asia Cup Tournament, On September 4, during India vs Pakistan match, Shahid Afridi’s daughter grabbed everyone’s attention as the video of her, in which she was seen waving the Indian flag went viral on various social media platforms at the speed of the light.

In a recent interview, the former captain of Pakistan confessed that he and his family were to witness the live game on Sunday at the Dubai International Cricket Stadium.

He said that his wife told him that there weren’t any Pakistani flags around since there were only approximately 10% of Pakistani supporters attending the game. Adding that his younger daughter waved the Indian flag, he expressed disinclination to post the video on Twitter.

In the video, he said,

“My wife told me that there were barely 10% Pakistani fans in the stadium and the rest were Indian fans. Pakistani flags were not available there so my younger daughter was waving the Indian flag. I received the video, but I was unsure about whether to share it online or not.”

Talking about Asia Cup 2022, Pakistan and Sri Lanka played a final match yesterday, in which Sri Lanka emerged as the winner of the tournament by portraying an overall excellent performance in everything, from batting to fielding to bowling.