Ileana Dcruz Reveals What She Finds “Sexiest” In A Man

By far one of the most underrated and extremely hot heroines who dabbled in Bollywood and South is Ileana D’Cruz. With films like Barfi and Rustom to flaunt she created much magic to stay in the hearts of her fan. Not to be seen so much now, we can only hope she would be back with a superlative performance that will stir up the nostalgic infatuation among us pretty soon.

Here we get a peek into her mind as Ileana talks about her deep thoughts. She would reveal what is that one thing that she finds the “sexiest” in a man whom she would like to date. Let’s get to the goss! 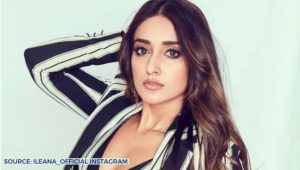 She is often seen replying with funk and quirk when it comes to interviews. She perhaps loves to take on interviews and talk show spots; the reason why she is a frequent face to get invited to a talk show. She unfolded some seriously fun things at the recently aired The Love. Laugh. Live Show hosted by supermodel Shibani Dandekar.

She revealed almost with a blush that she has “a thing for men with words” and for “men who can speak well”. Further she revealed how she also wants her partner to be musically inclined and that she thinks all of these are extremely sexy!

Check out her version and the entire video here:

Ileana would be soon seen in the Big Bull alongside Abhishek Bachchan and Durgesh Kumar.