Celebrities hold a remarkable stance in our country and when they a undergo drastic change by reducing tons of weight, then that surely serves as the best inspiration for a common man. One such inspiring that can win million of hearts is Anant Ambani’s drastic weight loss tale. 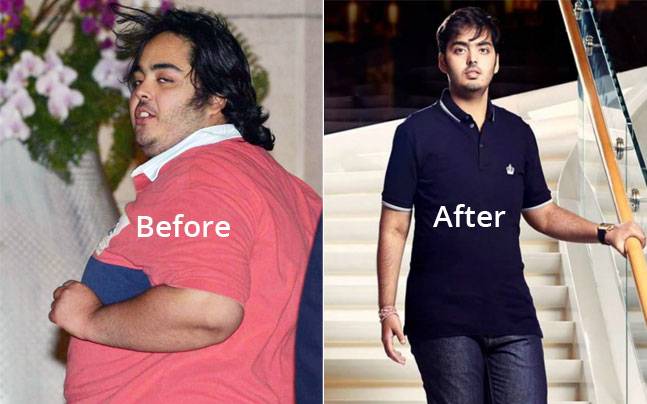 It is believed that Anant was diagnosed with chronic asthma. On receiving medication for the disease, Anant drastically induced a lot of weight. However, he had decided that he’d churn out all the extras that he had gained by the advent of his 21st birthday.

The uphill task was planned for 500 days that consisted of rigorous training sessions followed by a strict diet. The young Ambani worked closely with the star celebrity trainer, Vinod Channa who guided him throughout the back breaking physical and diet program.

“Anant Ambani’s body transformation was a team work. This is not only done by me but it was effort of Anant and Dr. Andre Chimone as well. In my 22 years of career, I have never seen a person with so much dedication.”

Not only did Anant impress Vinod, his trainer, but he successfully inspired Salman Khan, the biggest freak of Bollywood. Talking about Anand’s extraordinary body transformation, Salman Khan wrote:

“So happy to see Anant Ambani,lots of respect n sooo happy fr him.Takes a lot of willpower to loose 108kgs in 18mnths.”

So happy to see Anant Ambani,lots of respect n sooo happy fr him.Takes a lot of willpower to loose 108kgs in 18mnths pic.twitter.com/Rfd6pgAeEn

I hail from the city of Guwahati, Assam and strongly believe in finding a meaningful contentment in the subtle things of life. A published writer and an avid lover of literature, I am someone who is composed out of pain but watered with joy.
Previous Sushant Singh Rajput’s Sister Gives A Fitting Reply To Shiv Sena Politician Sanjay Raut
Next 10 Most Hilarious Requests Made To The Great Khali By His Fans