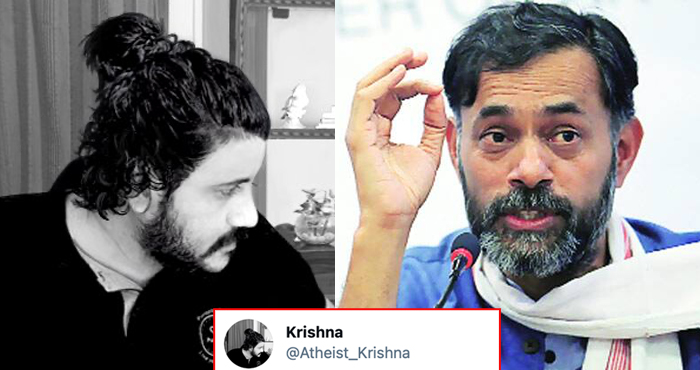 Popular Photoshop artist Krishna Panga, aka Atheist Krishna on various social media platforms, has always been in news for his hilarious edits on various trending topics across the country. Krishna once photoshopped the faces of Bollywood stars who came to meet Indian PM Narendra Modi with Jai Shree Ram slogan headbands.

Now Krishna is in the trends as he made another photoshopped meme on the currently trending matter of Suez Canal problem. A ship had tangled in between the shores of the canal and thwarted the passage of ships through it. This led to hundreds of million dollars loss to various trading countries.

He posted a photoshop of the ship with controversial politician Yogendra Yadav down the waters to rescue it. This portrayal of Yogendra was funny for the people because even the experts didn’t have any clue to get the ship to move away. You can see the tweet here :

Where is this genius when its most needed? #SuezCrisis pic.twitter.com/G0FUu7xEWq

In case you don’t find it funny enough, let us inform you that this was a sharp and satirical post by Krishna. Yogendra Yadav is a weird man who pretends to be an expert on every kind of debate on TV. He is generally seen beating around the bush on topics he has no clues after his short lived political career was over. Krishna asked why this genius of a person who has qualifications of all kinds to solve every kind of matter, is quite on this issue of Suez Canal.

If you don’t know Krishna, he shot to the fame when, in his interview with the prime minister, Akshay Kumar shared the meme with Narendra Modi.

WOOOOOW!!!!
This is the best thing that happened to me on Twitter. Thank you @akshaykumar Sir. 🙏🙏 pic.twitter.com/QOtJbTh65Z

Modi too appreciated the meme and had a laugh at it. Akshay had also made a video in appreciation of Krishna’s skills at that time which went viral on Twitter. Akshay thanked him for making light yet funny memes and making people happy.