The Bollywood stars enjoy a huge fan following in their social media accounts. It automatically initiates the importance of being active in it, to ensure a regular interaction with their fans. This is perhaps why the two budding stars of Bollywood, Alia and Arjun are overtly active in social media. 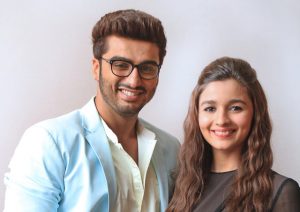 Recently, taking a toll over social media, many of the Bollywood stars shared pictures with their siblings on the occasion of Raksha Bandhan.

Out of the many, the most adorable post was made by Alia Bhatt. The gorgeous actress posted a picture on Instagram, where she tying rakhi to Yash Johar. Yash is the one year old son of the renowned Karan Johar, Alia’s mentor. She captioned the post with a sweet message:

“My beautiful baby brother!!! Aaaaah just look at that faceeeeee.”

It is not an unknown fact that Alia considers Karan’s twin sons, Roohi and Yash as her younger siblings. Alia undoubtedly had a heart-melting day with her two cute and little siblings.

The post was flooded by many adorable comments, coming mostly from the fans of Alia. However, there was one such comment which caught the attention of many. It was done by none other than Arjun Kapoor, the macho stud of Bollywood.

Arjun, who is known for his witty and humour, commented in the post: 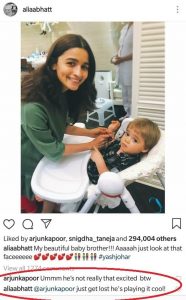 In his comment, he referred to Karan’s little son, Yash and his very serious expression in the picture.

When it comes to giving back stiff replies, Alia doesn’t lack behind anyone else. Taking a jibe at her ‘2 States’ co-star, Arjun, she replied:

The cool, friendly and hilarious banter between both the Bollywood stars served as an entertainment source for the netizens. They moved how both the stars took a humorous jibe at each other. 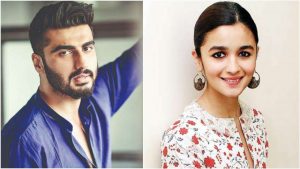