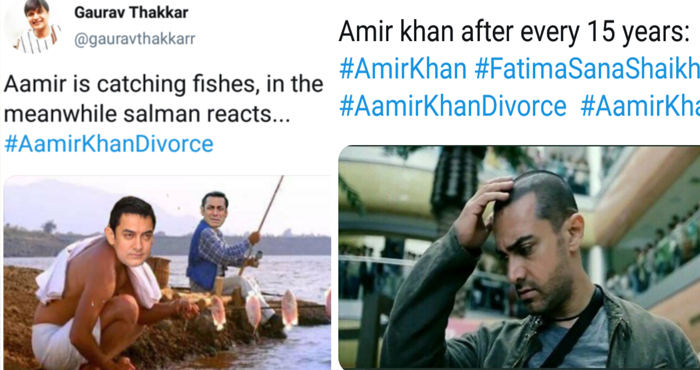 As the news of Aamir Khan and Kiran Rao’s divorce buzzed over the internet; there are mixed reviews fans are offering for the star. Some are wishing them good luck for the next journey and supporting the idea, while others are trolling the actor for his move of 2nd divorce.

The couple announced their divorce on Sunday through a joint statement in which they said they are happy and excited for their next journey. The couple also told that they are parting away from the marriage but they will be one family and take care of their son Azad together.
The meme about Aamir’s 2nd divorce is all over Instagram, Facebook, and Twitter. Coincidentally both his marriages with Reena Dutta and Kiran Rao last for 15-15 years. Now people are coming with different meme ideas, mostly featuring Salman Khan, Amitabh Bachchan, and Karan Singh Grover.

1. “Dhoka swabhav hai hamara” (betraying is my nature) is a dialogue of Aamir Khan from the movie Thugs of Hindustan’. Trough this meme people accused him of betraying both his wives.

2. Aamir divorced for the 2nd time, meanwhile, Salman has not married even once. In this meme Salman is sad about this.

3. “Samay aa gya hai aapse vida lene ka” (time to bid you a goodbye). It is assumed that every celebrity takes divorce after few years of their marriage.

4. Karan Singh Grover also took divorces for the two times from his ex-wives. Now Aamir balanced his records of divorces so Karan expresses desire to make new record in front of his current wife.

5. Salman was in a relationship with Aishwarya Rai Bachchan, who is married to Abhishek Bachchan now. In meme Salman is praying for Abhishek’s divorce amid of divorces of many other celebrities.

6. Amir played the role of a person suffering from short term memory loss in his movie Gajini. So now people are saying that Aamir forget about his wedding after every 15 years.

There are many such memes ruling over internet like this. Amid of all this, we wish all the best to Aamir and Kiran for their new journey.