Pathaan is all set to hit big screens later this month!

Recently, a list of the Censor Board of Film Certificate’s proposed edits and cuts that has to be made for the film Shah Rukh Khan starrer upcoming film Pathaan went viral on the internet, and people on the renowned platform Reddit are decoding the efficiency of the board. 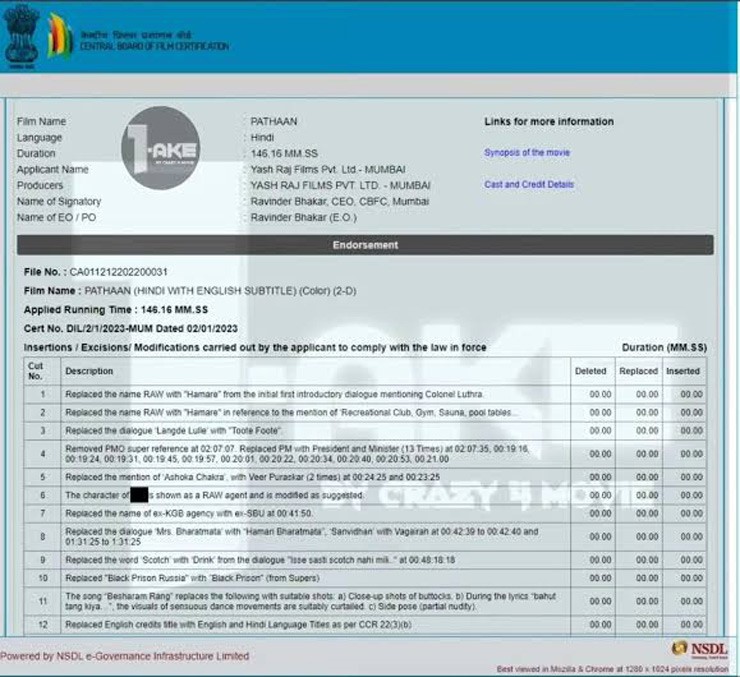 The censor board has made more than 10 cuts for the film which includes replacements of words and shots in the song that grabbed a lot of attention ‘Besharam Rang’ as well, according to the viral picture.

Song Besharam Rang was subjected to numerous controversies since its day of release and many people asked to change some shots in the song as it was ‘too revealing’ and ‘vulgar’ and it had initiated the debate of ‘how much the filmmakers can push the lines in name of a song?’. Now netizens have reacted to the censor board’s cuts in the song and the movie.

“The specific notes on Besharam Rang show that the censor board truly spent a while studying every frame.. that must have been fun”.

“Not me imagining a group of uncles in a dark room together feeling “sensuous” while watching Deepika lmao”.

“Trust me, if you want to make rules around this topic, you will make some strange choices too. This topic is impossible to nail. What is ok to show and what is not ok to show – you need some triple integration complex math to formulate it”.

The censor board has mentioned replacement shots like ‘Deepika’s side pose which showcases partial nudity’, ‘sensuous dance moves’, and ‘close-up shots of buttocks.

The censor board has still not given any official statement regarding the cuts, but people are of opinion that the changes have been made due to a major influence directly by some outer organizations which had problems with the song and film since the release of its teaser.

Tejasswi Prakash, Shehnaaz Gill & Anushka Sen Feature On The List Of ‘Most Handsome And Beautiful In The World 2022’

Tejasswi Prakash, Shehnaaz Gill & Anushka Sen Feature On The List Of 'Most Handsome And Beautiful In The World 2022'