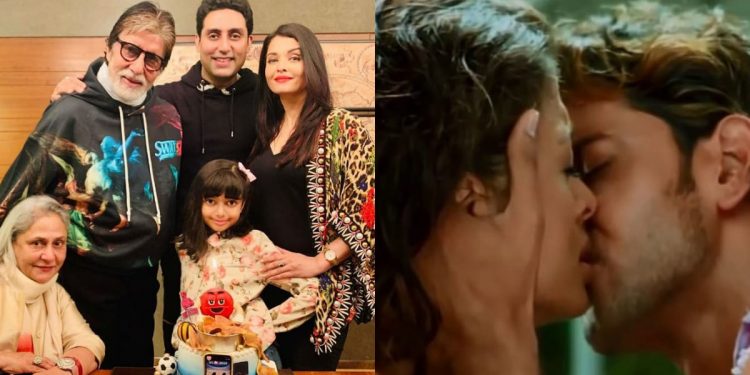 How much controversy a liplock scene, was highlighted when Aishwarya Rai did the unthinkable. A sequence that was recorded between Aishwarya Rai and Hrithik Roshan for the movie Dhoom 2 made the news back then. On the other hand, after filming this scene in which Aishwarya gets herself into conflict with the law. The Bachchan family was also furious after witnessing this scene.

In the 2006 film Dhoom 2, produced by Yash Raj Films, the actors Aishwarya Rai and Hrithik Roshan had a scene in which they kissed one another. Let us inform you that at that period, this event was covered in a great deal of the news.

The controversy that caught the attention of the media

Not only this, but Aishwarya also had to contend with a great deal of difficulty. Aishwarya Rai said in an interview that after filming this scene, she found herself in a sticky situation. A lot of people notified the authorities about her situation. Not only that, but this was also the time that he was engaged to Abhishek Bachchan. Therefore, the Bachchan family was also upset over this scenario.

Aishwarya said in an interview with a fashion magazine that she had to go through a lot of pain. This was with regards to certain parts of the film. She had said that the reason she did not accept many Hollywood screenplays was that she did not feel comfortable performing parts that required her to be physically active. She said, “I was aware that the audience would not be comfortable with it. Then I felt that if I had to do it, I would do it in Bollywood first. I wanted to find out whether I was as good as I believed I was. And I also wanted to see if the outcome was as bad as they imagined it would be.”

Aishwarya said, “I had heard that I had performed that specific sequence in the movie, and as a result, many individuals from all across the nation had sent a legal notice to me.” The legal notification referred to her as an icon and said that she should set a good example for ]young women by living her life in such a way that others may learn from it. This is not a sight that makes them feel at ease. They are confused as to why Aishwariya created it.

What was the situation involving Aishwarya Rai?

Let us begin by stating that Aishwarya is an actress with a significant number of admirers. These look up to her as a model for themselves. Although you may have seen many of the stars and actresses having lip locks and being affectionate on TV, Aishwarya found it difficult to play out such scenes. Because of the moment, Aishwarya had to deal with a significant amount of difficulty. That is even though she makes every effort to avoid being involved in controversial situations.

According to reports, Abhishek Bachchan stopped talking to Hrithik after seeing a moment in which he and Aishwarya were seen kissing. This occurred around the same time that Ash and Abhishek got engaged.

In addition to this, sources from the media state that the Bachchan family did all in their power to get this sequence excised from the movie. But they could not be successful. Permit us to inform you that the movie was a smashing success. This movie gave audiences a glimpse of Aish’s very gorgeous appearance.