by Vandita Sharma
in Fitting Replies
0

Ravi Shastri has been a great contribution to Indian cricket in an uncountable different ways for more than a decade now.  A magnificent allrounder middle-order batsman and  a trustworthy left-arm spinner, a long-serving backup to a lot  of captains leading the Indian cricket team. List of his achievements  is way too long. Ravi Shastri has appeared in n number of  formats throughout his journey in cricket. Former India all-rounder was also part of the squad that won the world cup in 1983. People also witnessed his  marvelous commentary and later on he was given responsibility of being head coach for Indian cricket team. He excelled in each and every field remarkably.

These days Fans witnessing   the social media version of Shastri, as the former coach took  over Twitter with numerous tweets. It seems that shastri ji  is enjoying his short break from his stress full  job as India’s coaching staff. His term as coach of the Indian team ended after the T20 World Cup which was held in 2021.

Ravi  Shastri is known for being sarcastic and funny and his tweets are the biggest evidence for the same.  Few days ago He  surprised his followers by altering  his bio to “Happy hours always.” 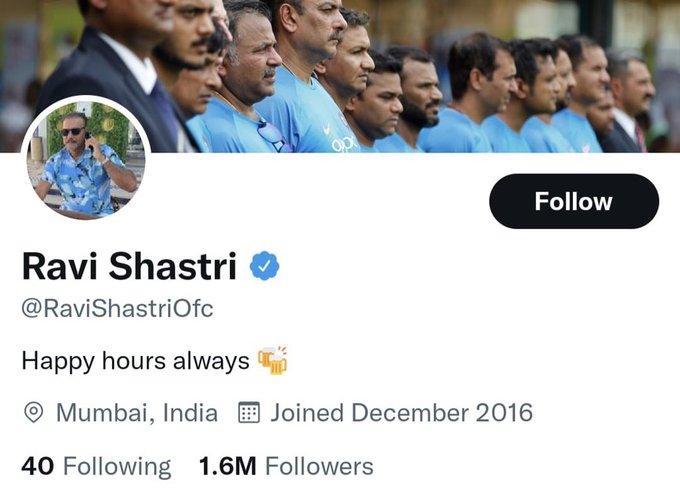 The former Indian all-rounder then tweeted three back-to-back photos of himself spiffed up in a disco, along with weird captions, which created a buzz amongst Twitter users. Shastri held a Q&A session with his fans saying I’M IN GOOD MOOD after captivating them by posting  photos of himself wearing sporting a blingy coat, a gold chain, and a visor. Fans flooded the twitter with #AskRavi tweets, but he responded to few reasonable ones.One of the fans asked  Shastri to choose between current captain of  Rohit Sharma and former captain Virat Kohli. Shastri’s response  had nothing to do with game but divided supporters

While memers converted the images into memes, some alleged  that Ravi Shastri’s account had been hacked, while others claimed  that it was nothing but a publicity stunt. whatever the scenario was, but it was fun seeing this side of former cricketer.

From ‘Fat’ To ‘Fit.’... Here’s Jaw-Dropping Transformation Of These 7 Bollywood Celebrities