Urvashi Rautela is in limelight again

Urvashi Rautela shares a picture with Ram Pothineni & netizens wonder if he’s the ‘RP’ in her life and not Rishabh Pant.

As we all know, Urvashi Rautela is in limelight for the last couple of months and it’s mostly because of her linkup and controversy with cricketer Rishabh Pant. The whole controversy started when Urvashi Rautela revealed in an interview that someone known as ‘RP’ had waited hours outside her hotel lobby and every person started speculating if it was Rishabh Pant is the one, she was talking about. Moreover, Rishabh Pant even gave a fitting reply to her taking his Instagram handle. Urvashi also replied to Rishabh and the whole thing turned into a social media war.

Surprisingly, now it seems like the actress has unveiled who ‘RP’ actually is.

Recently, Urvashi took to her Instagram account and shared a picture of herself with actor Ram Pothineni. The picture went viral in an instant. She was dressed in a semi-transparent, lemon knee-length dress with frills. Ram was wearing a casual in a white shirt and grey pants. Urvashi has got 58.6 million followers on Instagram recently.

From commenting on Urvashi Rautela finally unveiling RP to tagging Rishabh Pant and asking him if he’s taking note of what the actress is doing, here’s what netizens have to say about it.

Sharing the picture on Insta, the actress simply captioned it, “@ram_pothineni” along with a red rose and black heart. 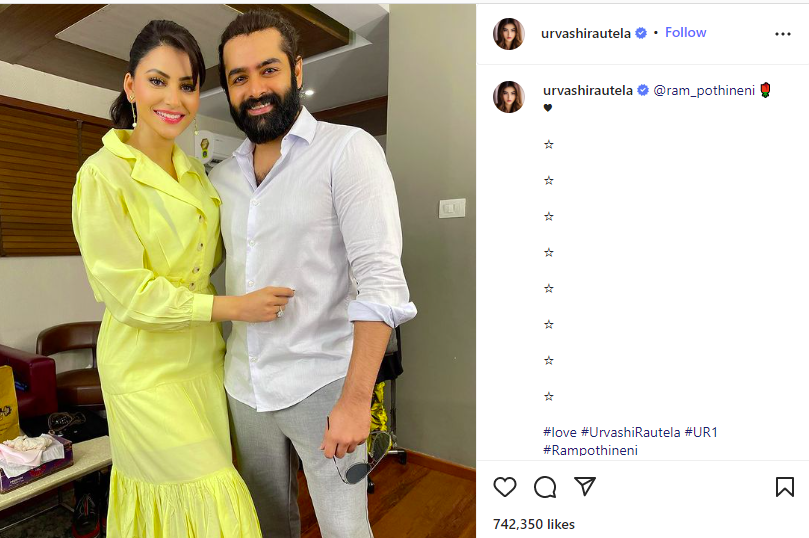 The picture received numerous likes and comments and after finally understanding who Urvashi Rautela meant by RP in her posts, one netizen wrote,

Dragging in Rishabh Pant into the discussion of the latest post, one user wrote,

Is the ‘RP’ in Rautela’s life – Ram Pothineni or Rishabh Pant? Well, no one knows if she is covering up after being trolled or if RP really is Ram.