Urfi Javed got trolled again for her dressing sense 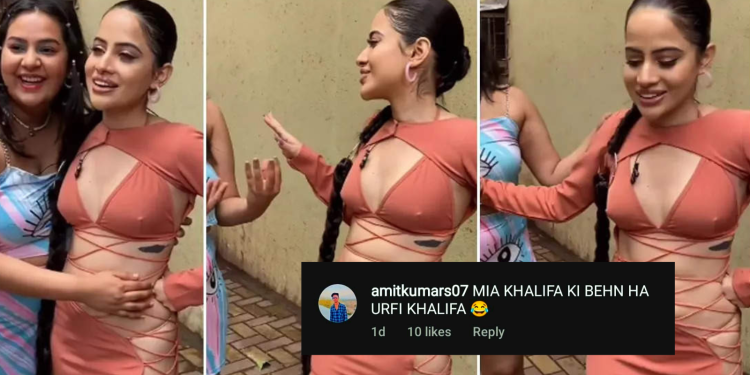 Popular Tv actress Urfi Javed, stays in limelight every other day and now almost everyone knows the reason. Yes, you are right, Her fashion sense and unusual dressing style. She participated in season one of Bigg Boss OTT and since then she stays in news. Apart from being an actress, she is really very active on social media, Instagram to be more specific. she posts her picture and videos in different looks and outfits more often than usual .

She have been trolled numerously in past because of her dressing sense. Sometimes she gives fitting replies and prefer to ignore other times.

The way she carries herself with confidence wearing unusual outfits is something that must be appreciated. on contrary, Urfi is often criticized for her unorthodox style sense and  once again she have become the target of trolls.

The young lady recently showed up  in Mumbai wearing a cut-out bodycon dress. Few minutes later, she was seen enjoying Vada Pav with the media persons. In very less time her pictures and videos went viral on social media and people started making fun of her as usual. Many netizens praised her all over look and showered their love. On the other side, there were some people who got disappointed & triggered . They dropped some harsh, ridiculous and mean comments.

And the comments like these went  on increasing rapidly,

‘Yeh aur celebrity what a joke.

This is not the first time she is being criticized, she received backlash for her dressing sense in past as well. She has been trolled n number of times as we mentioned above but the actress doesn’t really care about these trolls and loves herself the way she is .