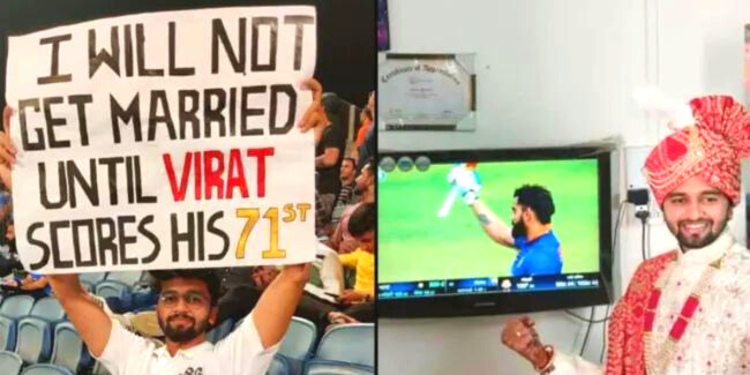 It took a long time, but Virat Kohli finally reached his 71st international century, much to the delight of his legion of devoted supporters. For one devoted follower, however, the wait has been excruciatingly protracted. Aman Agarwal once raised a sign at a stadium declaring his intention to wait to tie the knot until Virat Kohli scored his 71st century. Now that Kohli has, Aman can fill you in on the latest details of the wedding. In 2019, Kohli achieved century number 70 against Bangladesh. Kohli’s 71st century came in 2022, during the T20 Asia Cup, against Afghanistan, bringing an end to the century drought. After Kohli hit his 71st century, Aman followed through on his promise and tied the knot at his wedding. In addition, on January 15 (Aman’s wedding day), Kohli hit his 74th century.

“I asked for the 71st century but he scored 74th on my special day,” Aman tweeted a day later.

"I asked for the 71st century but he scored 74th on my special day" ❤️❤️❤️@imVkohli @AnushkaSharma @StayWrogn pic.twitter.com/zHopZmzKdH

In terms of international tons, Kohli is second to Sachin Tendulkar (who has 100 tons) among current players. The 34-year-old needs just 4 more ODI hundreds to surpass Sachin’s record of 49 in ODI, and he may do it before the end of 2023, if not in the World Cup itself.

When Kohli scored a century in 2022, it marked the end of a long dry spell in which he had failed to reach the century mark in Twenty20 Internationals. He has reached triple digits in all international cricket forms. Kohli has scored 27 tons in Tests.