One of the most renowned, successful and rich business company of India, Reliance Industries was initiated by Late Dhirubhai Ambani, after which the company was taken over by Mukesh Ambani on his father’s death. Back in 2017, the Ambanis had thrown a huge party for the successful conduct of the company for 40 continuous in India. The party thrown by the Ambani’s was a lavish one where several celebraties were seen being present, out of which the biggest name in the list was that of the Badshah of Bollywood and the conqueror of million hearts, Shah Rukh Khan. In addition to being present for the huge bash, Shah Rukh was also the host of the whole evening. Being a grand name in himself, Shah Rukh Khan has rightfully established his staunch identity and witty personality through Bollywood Cinema. 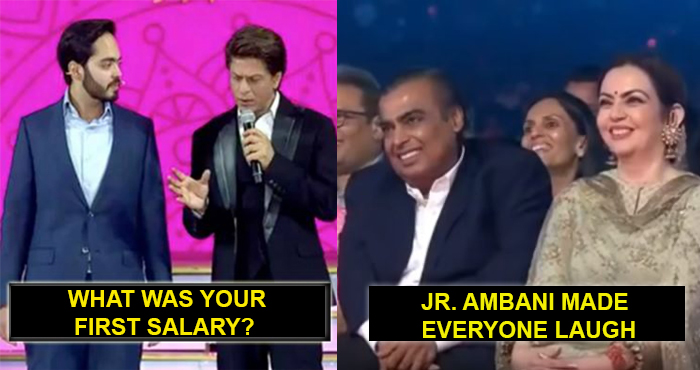 Hosting is definitely not an easy task as it requires an indefinite amount of confidence, skill and humour to keep the crowd intersted and engaging towards the programme. In order to fill the void between the audience and the stage, Shah Rukh Khan followed his years of experience and called up Anant Ambani, the eldest son of Mukesh Ambani to the stage in order to keep the crowd engaged.

Shah Rukh Khan recalled moments from his childhood while compelling everyone present there to release their pressures through laughter. Going beyond that, Shah Rukh also had a fun moment with Anant by questioning him about his first salary amount. In the same conversation, the mega star in a witty manner announced that his first salary was just INR 50. Coming forward with a reply to Shah Rukh’s question on Anant’s first salary, here’s what the young lad told him which made the whole audience go bonkers out of laughter.

ShahRukh Khan said “My first salary was INR 50. What was yours Anant?” to which Anant replied “Leave it, you will feel a little embarrassed if I tell you this.”

On this hilarious response coming from the side of Anant Ambani, the whole audience let out huge rounds of whistles, laughter and applause.

I hail from the city of Guwahati, Assam and strongly believe in finding a meaningful contentment in the subtle things of life. A published writer and an avid lover of literature, I am someone who is composed out of pain but watered with joy.
Previous Indian Guy Proposed Dutch Pilot On Instagram And Got Trolled By Her Husband
Next List Of 15 Most Versatile Bollywood Actors And Where They Hail From 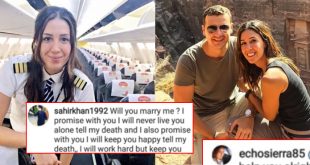 Greetings friends!! Today, we are going to tell you about an incident where a desi …