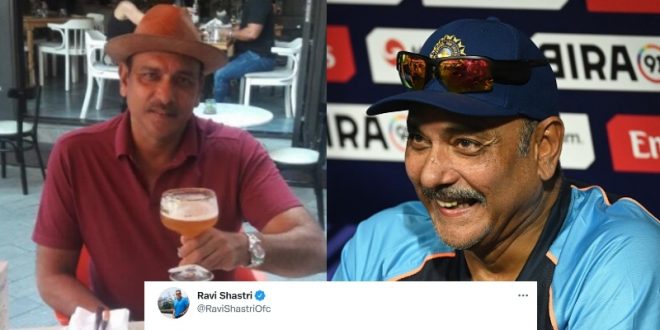 Former Indian cricketer Ravi Shastri’s term as the head coach of the Indian cricket team came to an end after India’s ouster from the ICC T20i World Cup 2021. Under his guidance, team India reached new heights and achieved several milestones. Apart from his professional duties, Ravi Shastri was one of the major talking points on social media.

Shastri has not just drawn praises for his crucial role behind India’s success during his tenure but also for his character off-field has given jobs to several meme-makers as well. Shastri has often been the butt of all jokes on social media.

Shame on people who think Ravi Shastri only keeps drinking whiskey in the Indian dressing room and think that's his only job. He drinks beer and champagne too #RaviShastri #ViratKohli #Cricket pic.twitter.com/l6HGnE8uEv

From his expressions, while sitting in the dressing room or some of his comments, memers and trolls never missed a chance to showcase their creative side at his expense. In fact, trolls often photoshopped his pictures with cocktail drinks and beer bottles in his hands and all around him. It would be wrong to deny but these memes have made everyone laugh even during the tough times.

Recently, in an interview with news anchor Rajdeep Sardesai, Ravi Shastri was asked about the memes and jokes. Responding to him, Shastri addressed the online trolls, and came up with a hilarious reply, citing what he wants to do with them. He said:

“I quite enjoyed some of them (memes). That’s talent also. When they suddenly make me have a paunch, then it disappears the next day,”

“There are bottles everywhere, it is a laugh at my expense. So at least in tough times you kept people in good humour. I would like to invite some of them for a drink,”