The most elegant Raveena Tandon has ruled the hearts of many during her entire career in Bollywood. This perhaps why she is fondly called the ‘Ravishing Raveena’ by her fans.

Raveena Tandon, who is very active on her social media, recently took to her social media to share a special moment. She shared a throwback picture of herself, her husband and renowned film distributor Anil Thadani, from one of their vacations in the snowy mountains. Sharing the picture, Raveena wrote:

“#throwback When the summer gets to hot to handle… my heart dreaming of snowy vacays , soft ,fresh snowed in slopes and the icy moon.. disclaimer- always in #fauxfur”

The post went viral soon and it hit the buzz for a long time. It also received a lot of comments, all drived by the love of her fans. In the comment sections, she left everyone in splits with her hilarious reply to a fan who asked her to marry him in the next birth.

An Instagram user asked her to marry him by writing:

“Raveena ma’am, will you marry me in your next birth?”

The star diva soon noticed the comment, after which she came up with a hilarious response. In her reply, Raveena wrote how she is crystal clear in spending her next 7 births with her husband. She wrote:

When it comes down to Raveena’s career stance, she will be next noticed in Yash’s KGF: Chapter 2, which also stars Sanjay Dutt. A Prashanth Neel direction, it is one of the most awaited and anticipated movie of the decade.

I hail from the city of Guwahati, Assam and strongly believe in finding a meaningful contentment in the subtle things of life. A published writer and an avid lover of literature, I am someone who is composed out of pain but watered with joy.
Previous Sidharth Malhotra defends Alia Bhatt, Gives A Fitting Reply To Kamaal R Khan
Next 7 Bollywood Actresses Who Gave Shutting Replies To Body Shamers 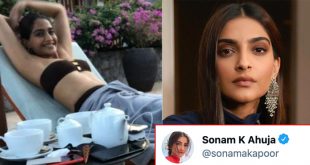