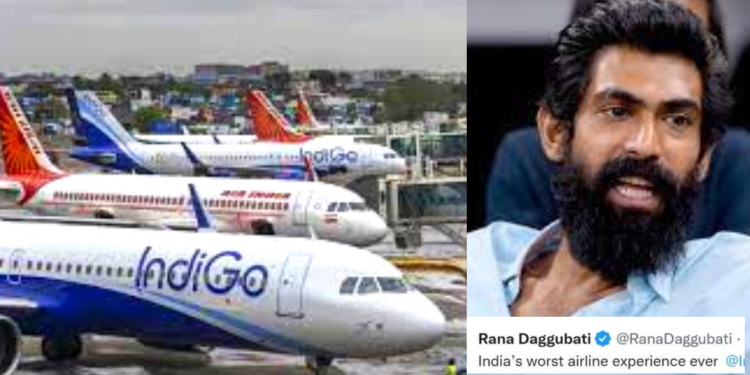 Recently, South Indian superstar Rana Daggubati faced some harassment and had a really bad experience while he was traveling with Indigo Airlines.

Reportedly, the Bahubali actor recently visited Goa for the 53rd International Film Festival of India (IFFI) and according to rumors incident took place there. However, the place isn’t confirmed yet. At the event, he was quoted by the news agency ANI,

Rana Daggubati took to Twitter and heavily criticized the airline

With a gif image of the Indigo airline company he wrote,

“India’s worst airline experience ever @IndiGo6E !! Clueless with flight times…Missing luggage not tracked…staff has no clue can it be any shittier!!” The actor was mad and disappointed by their service that he couldn’t get away with what happened to him. He slammed the airline with multiple tweets and wrote sarcastic replies to the brand’s promotional tweets.

While retweeting a post from Indigo Airlines which read,

“Maybe engineers are good staff is clueless !! You might need to do something properly.”

“Note with this sale flights might not land or take off on anytime schedule!! – your luggage they’ll have no clue about.”

“While we apologize for the inconvenience caused in the meantime, please be assured, our team is actively working to get your luggage delivered to you at the earliest”

Sir, we understand the discomfort when the bag doesn't arrive with you. While we apologise for the inconvenience caused in the meantime, please be assured, our team is actively working to get your luggage delivered to you at the earliest. (1/2)

Amid all these, a video in which two baggage handlers of IndiGo carelessly offload two boxes from the aircraft to a container is doing the rounds on Twitter.

Hi @IndiGo6E is this how you handle all flight luggage everyday or today was special? pic.twitter.com/A15hN6RxeJ

The domestic airline later issued a clarification that the customers’ luggage was not mishandled. The bags in the video contained non-fragile cargo and their packaging can “endure fast maneuvers.”

Well, this is not the first time Indigo’s services have been questioned by an actor, in June actor Pooja Hegde complained about the rude behavior of an indigo staff. The airline badly needs scrutinization for their services.

Pooja revealed that the indigo official used an “arrogant, ignorant, and threatening tone for no reason.” The actress got an apology from the company, and they asked her to connect with them.

Earlier, for not allowing a boy with special needs to board a flight from Ranchi, the airline was imposed a fine of ₹ 5 lakh by the Directorate General of Civil Aviation (DGCA). IndiGo ground staff were heavily criticized for not allowing the child to board the flight.

What’s your opinion about Indigo Airlines? Let us know in the comments section.