As we all know, India lost a gem this month. One of the most popular comedian-actor Raju Srivastava passed away at the age of 58 on September 21. Undoubtedly, he was one of the most loved comedians of all time. Raju Srivastava took his last breath at the All-India Institute of Medical Sciences (AIIMS) in New Delhi.  On August 10 he was admitted to AIIMS after he suffered a Cardiac arrest while working out at a Delhi gym. The veteran actor Amitabh Bachchan sent a voice message for him while Raju was in the hospital.

In case you don’t know, Raju Srivastava regarded Amitabh Bachchan as his idol. Moreover, Raju came into the limelight and got noticed because he resembled Big B. 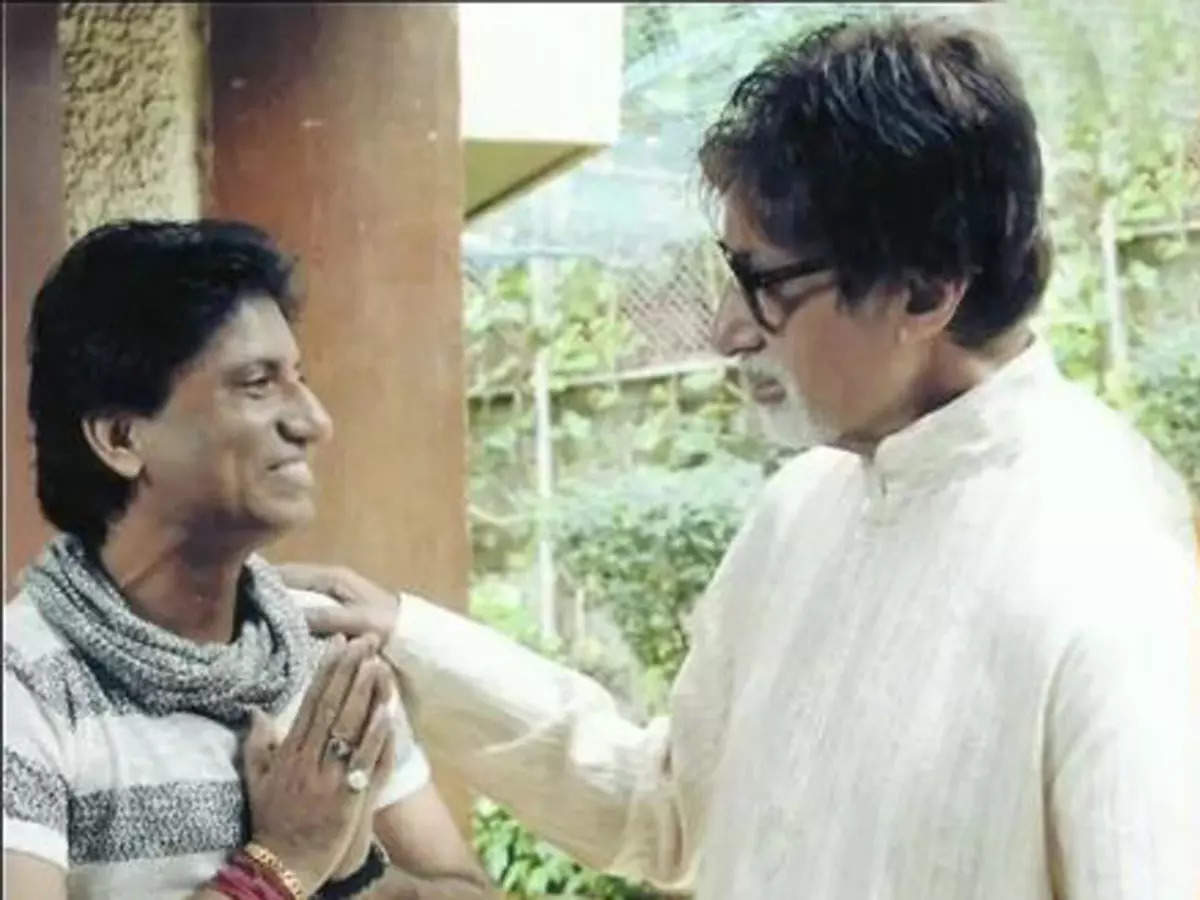 Raju Srivastav acted in numerous Hindi movies like Baazigar, Aamdani Atthanni Kharcha Rupaiya, Bombay to Goa, and others. In The Great Indian Laughter Challenge – Champions he won the title of “The King of Comedy”. He became a popular standup comedian who used to perform in live shows. He was also one of the contestants on Bigg Boss season 3.

Recently, Raju Srivastav’s daughter Antara expressed her gratitude to the veteran actor Amitabh Bachchan with a thank you note.She told that Mr.Bachchan has a huge role in her late father Raju Srivastava’s success. She described how Big B has always been there for them and stood by her family during tough times.

Antara Srivastava, through an Instagram post, expressed how grateful she is for the veteran actor’s support, she wrote,

“Extremely grateful to Shri @amitabh Bachchan uncle for being there for us every single day during this tough time. Your prayers gave us an abundance of strength and support, which we will remember forever. My mother Shikha, brother @aayushmaan.srivastava, my entire family, and I, @antarasrivastava, are eternally thankful to you. The love and admiration he receives globally is all because of you,” 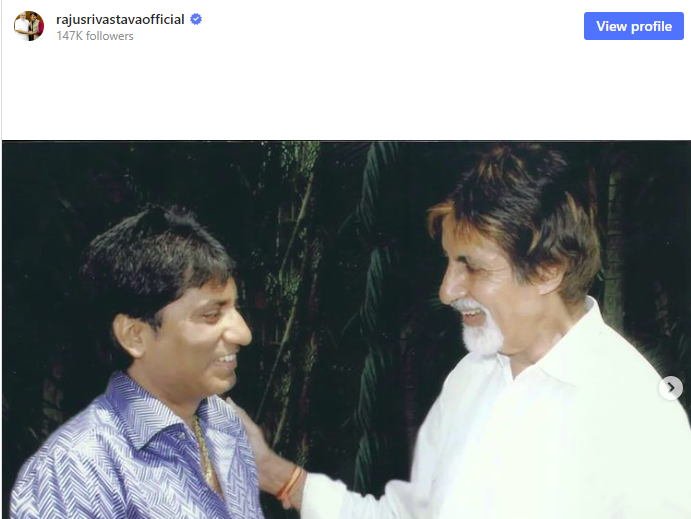 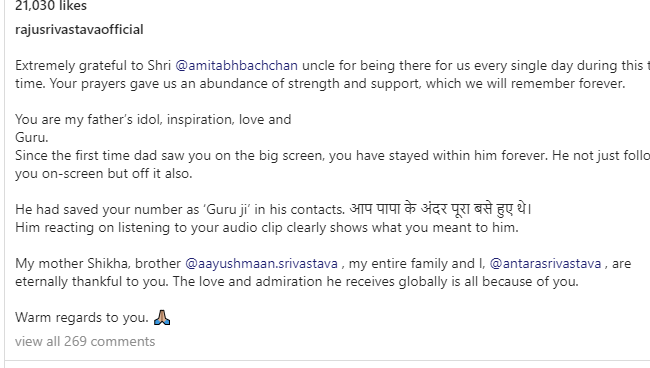 She wrote this along with the pictures of her father with the legend.

She further revealed that her father had saved Amitabh Bachchan’s number by the name ‘Guru Ji’ in his contacts. She wrote,

“You are my father’s idol, inspiration, love, and Guru. Since the first time dad saw you on the big screen, you have stayed within him forever. He not just followed you on-screen but off it also,”

During Raju’s hospitalization, the voice note sent by AB to Srivastava’s family helped them to cope with the treatment. It was heard by the late stand-up comedian. Antara said, 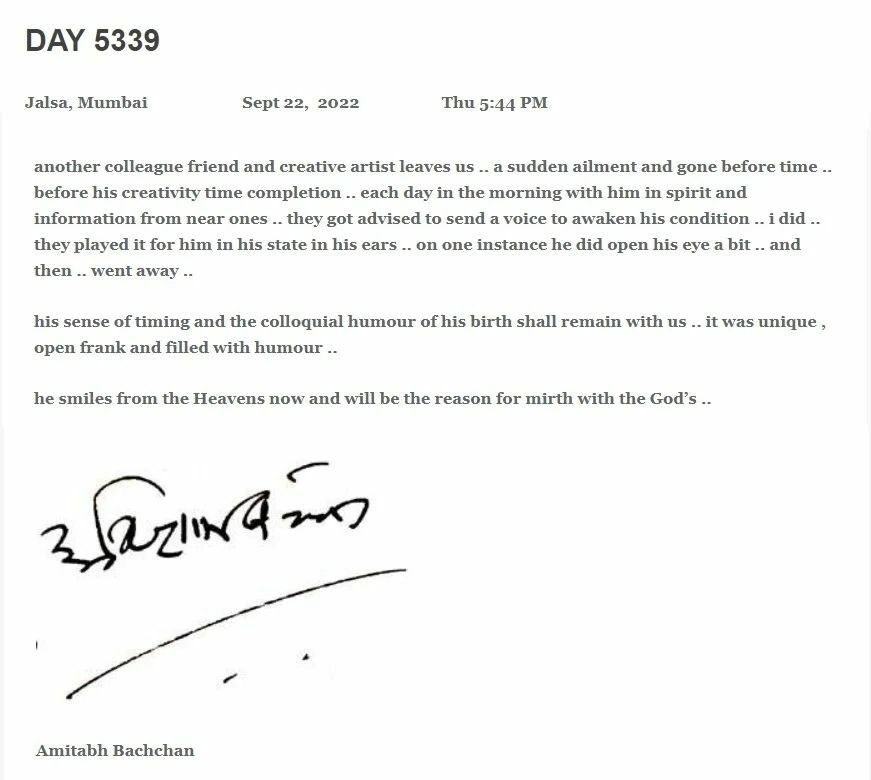 On 10 August 2022, Raju Srivastav complained of chest pain and suffered a cardiac arrest while running on the treadmill in the gym. He was put on a ventilator after undergoing an angioplasty. He was also treated by neurologists as the swelling was observed in his brain during his treatment. After suffering a heart attack his condition got worse. He died during his treatment in Delhi on 21 September morning. The post-mortem was conducted using a virtual autopsy.

Apart from being a comedian, Raju Srivastav was also the chairperson of the Uttar Pradesh Film Development Council. Srivastava is survived by his wife Shikha, daughter Antara, and son Aayushmaan.