As we all know a few days ago, Taapsee Pannu got upset with the paparazzi at an event. However, she appeared to have fixed and repaired her bridges with the photographers and media personnel.

She was recently spotted at Ayushmann Khurrana’s Diwali party in Mumbai. Surprisingly, Taapsee not only smiled at the cameras but also stopped there for a small interaction with the media persons outside the venue. 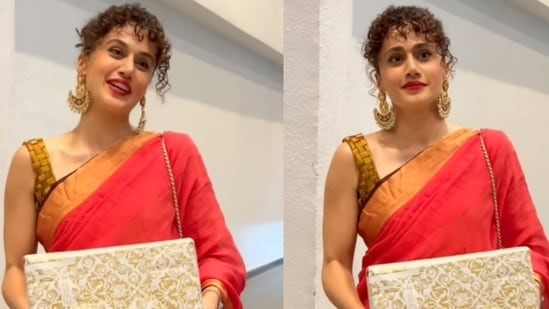 A video of her having a conversation with the paparazzi went viral online. In the video, a camera person is heard requesting Taapsee not to shout at them, before clicking her photos. He said,

“Aap aise harkate nahi karoge to nahi chillaungi. (I won’t scream if you don’t misbehave with me).”

Taapsee was looking stunning in a red saree which she paired with a golden blouse. She was also holding a gift in her hands, and it was nice to see her smiling and posing for pictures.  Apart from Taapsee, numerous other celebrities such as Kartik Aaryan, Karan Johar, Kriti Sanon, Ananya Panday, Richa Chadha, and Ali Fazal were also spotted at Ayushmann’s party. On the professional front, Pannu was last seen in Anurag Kashyap’s Dobaaraa. The sci-fi thriller film is based on the concept of time travel and was the official Hindi adaptation of a Spanish thriller film Mirage. It also featured Pavail Gulati.

Taapsee will be next seen in the maiden project of her production house, Blurr. She also has Woh Ladki Hai Kahaan. With Scam fame Pratik Gandhi. She will also be sharing the screen with Shah Rukh Khan for the first time in filmmaker Rajkumar Hirani’s Dunki.