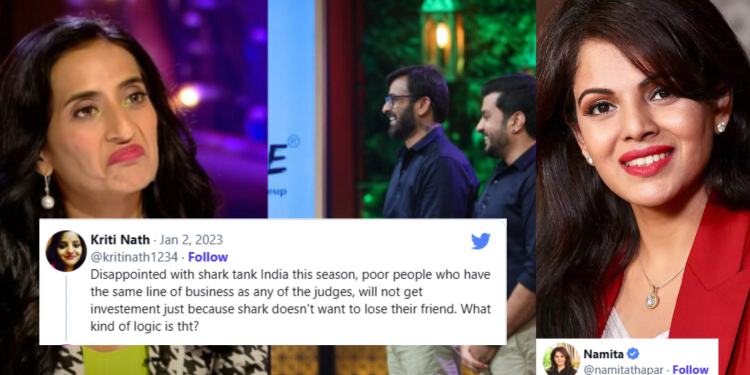 The second season of the Indian version of Shark Tank has returned to our screens, and viewers have high hopes that it will be even more successful than the first. Many fans, however, are disappointed that Ashneer Grover will not be returning to the program, since it was, he who generated the most laughs with his quips and observations, many of which have already been turned into internet memes. Anupam Mittal, Vineeta Singh, Peyush Bansal, Namita Thapar, Aman Gupta, and now CarDekho co-founder Amit Jain have all been on the program as “Sharks.” A controversy has arisen shortly after the airing of a few episodes, however, since the sharks declined to invest in a business that competes with the company held by a buddy, a fellow shark.

The beauty company in question is called Recode, and while the sharks applauded the two entrepreneurs for their efforts, they all declined to invest in the company since it competes with SUGAR cosmetics, owned by Vineeta Singh. They left Vineeta Singh surprised by informing her that SUGAR follows Recode on Instagram when she admits that she has never heard of the name of their company despite being from the same industry.

You can see the pitchers sell their product and hear Namita Thapar’s immediate rejection of their investment proposal in this video clip:

Audiences were not amused, and several criticized the sharks, comparing the show to a comedy or a serial drama. Here are a few chosen responses:

Disappointed with shark tank India this season, poor people who have the same line of business as any of the judges, will not get investement just because shark doesn't want to lose their friend. What kind of logic is tht?

Missed opportunity of taking over a competitor….if Recode is a competition, then owning equity in it would have made sense and later merging it with your own company if it does well…well bad business sense I guess..sometimes it's good to learn from Elon musk

why have they turned shark tank season 2 into a full tv serial drama. “mein apne doston ke competition pe invest nahi karta” bhai??? y’all are an investor what is wrong w you guys?? i love how peyush went this is stupid.

If direct competitors like Recode are not investible just because of your friendly relations with co-sharks, why did you waste yours and their time and energy by even shortlisting them for pitch presentation. Its a joke Sharks.

I didn't even know that sugar existed they can't even create one good social media campaign or Media advertisement..What she took ranveer and Tamanna and they were like Shukar Hai Sugar hai it's dr caption lmao 🤣🤣 see the creativity

The shark Namita Thapar responded to the online harassment by posting a lengthy Twitter thread. She wrote: “Being a shark doesn’t mean we are not entitled to our independent values & speaking candidly so if I don’t invest in a fellow sharks competition, that’s me, no regrets & if I call out toxicity & don’t join the ignorant that celebrate people w lack of integrity.. that’s me :)”

Being a shark doesn’t mean we are not entitled to our independent values & speaking candidly so if I don’t invest in a fellow sharks competition, that’s me, no regrets & if I call out toxicity & don’t join the ignorant that celebrate people w lack of integrity.. that’s me 🙂