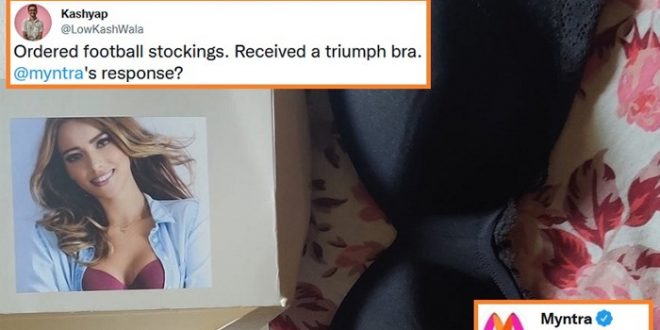 Online shopping is quick and convenient. It has become a part of our lives and infact, has made our lives easier. Though there are a number of advantages of online shopping but there is always a catch. Time and again we have witnessed several cases where customers have been fooled as they have gotten wrong items or empty boxes. You never know what you will get until the stuff that you ordered arrives.

In this article, we bring you one such case, where the guy was left totally in shock after he received a padded bra instead of the football stockings that he had ordered.

Yes, you read that right. A Twitter user named Kashyap with the handle name, @LowKashWala revealed his bizarre experience of online shopping. It was on October 12th, when Kashyap received a black Triumph bra instead of the football stockings that he had ordered. However, to make things worst, when Kashyap tried to return the item, the firm refused to replace the merchandise.

This is the message he received from the firm:

Feeling helpless after receiving this reply, the guy took to his Twitter and shared a picture of the goods he had gotten as well as Myntra’s reaction. He came up with a hilarious caption, he wrote: “Ordered football stockings. Received a triumph bra. @myntra’s response? “Sorry, can’t replace it”. So I’m going to be wearing a 34 CC bra to football games, fellas. Ima call it my sports bra.”

So I'm going to be wearing a 34 CC bra to football games, fellas. Ima call it my sports bra. pic.twitter.com/hVKVwJLWGr

The Tweet has gone crazily viral on social media and has left the netizens in splits. Several people narrated similar stories in the comments section and criticized the e-commerce businesses for such mistakes. There were many who came up with hilarious responses while reacting to the Tweet.

Cut it in half and use them as knee caps. You’ll be the coolest kid in the block.

Order another pair of stockings to stuff this with 🙂

A brassiere worn by a dude to a football game should be called a Brossiere.

After receiving a lot of criticism and backlash on Twitter, Myntra was quick to respond to Kashyap’s complaint. Myntra promised the man that his complaint had been raised and will be dealt with on a priority basis.

I hear you and apologize for the unintended grievance caused. Kashyap! Please be assured that we are working on it on priority. As promised, one of our case managers will contact you within the mentioned time frame with an update. I appreciate your patience shown here. -AY