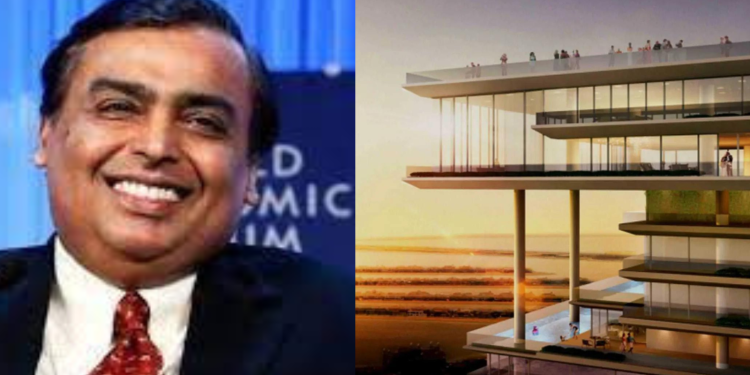 As per the latest reports,  Mukesh Ambani bought a beach-side villa in Dubai worth a whopping amount of $80 million.

This is the biggest ever deal in the UAE city as per the sources and the villa was reportedly purchased earlier this year for Anant Ambani, the youngest son of Mukesh Ambani.

Anant is one of the heirs to Ambani’s $93.3-billion net worth, along with his siblings Isha and Akash. The beach-side mansion is located in the northern part of the palm-shaped artificial archipelago in Dubai, as per Bloomberg’s report.

It has 10 bedrooms, a private spa, indoor and outdoor pools, and other extravagant amenities.

This news made headlines at the time when the 65-year-old world’s 11th richest person is slowly apportioning the reins of his businesses to his children following a diversification of his humungous empire, which witnessed RIL’s debut into green energy, tech, and e-commerce.

The recent property deal in Dubai has been kept secret till now and will be held by one of Reliance’s offshore entities. It is also being said that the Ambani family will spend millions of dollars to customize the property and ensure its security.

Parimal Nathwani, director of corporate affairs at the RIL group and a member of the Parliament, will manage the villa. Nathwani is also a close associate of the Ambanis. However,  Antilia the 27-story tower in Mumbai which has three helipads, parking for 168 cars, a 50-seat movie theater, a grand ballroom, and nine elevators will continue to be the Ambani family’s primary residence Dubai’s Palm Jumeirah has posh hotels, glitzy clubs, spas, restaurants, and splashy apartment towers with an amazing view of the Persian Gulf’s blue waters, and a luxury home as well.

Anant will now become the neighbor of some of the most celebrities in the world such as David Beckham and his wife Victoria, and Shah Rukh Khan.

It has been witnessed that Dubai has become a favorite spot for the super-rich, whom the government has encouraged to come by handing them out “golden visas” and relaxing curbs on homeownership for foreigners.

Do you know? Dubai’s real estate market contributes around a third of the country’s economy and is recovering from a seven-year downfall that occurred due to the Covid-19 pandemic at the speed of a cheetah.

The government has taken numerous measures including implementing a rule that offers investors to obtain a 10-year visa if they buy a property of at least 2 million dirhams.