Priyanka Chopra and Nick Jonas fans around the world were left shocked after the global actress Priyanka Chopra Jonas dropped her surname on her Twitter and Instagram profiles. Her profile on the photo-sharing platform now reads just Priyanka. Ever since then the couple has been on the top of the trends as the internet was left in a tizzy. 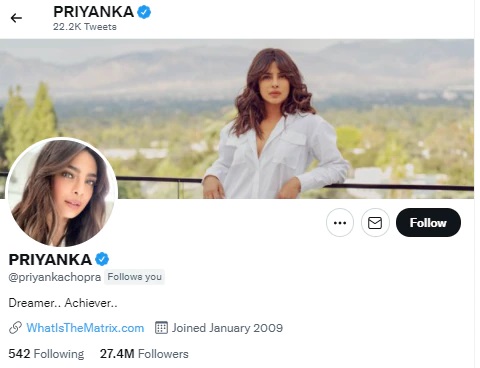 Though it might or might not mean a big deal for everyone, but the true fans of PeeCee were left confused and heartbroken. This beautiful couple has been married for three years, they would be celebrating their third wedding anniversary next month.

However, Priyanka Chopra’s changed username on social media has also led to speculations about the couple’s current relationship status. The media houses and the gossip mills are busy churning out stories one after the other hinting of a possible divorce. Several netizens took to social media and started speculating about a rift between Priyanka and her husband Nick.

#PriyankaChopra dropped #Jonas name from her IG profile ..What if #NickJonas is taking her name and changing it to #NickJonasChopra ..
Any clue ??

Zayn and Gigi, Shawn and Camilla and now maybe Nick and Priyanka👀#PriyankaChopra #NickJonas

However, all seems to be fine in the paradise of Priyanka and Nick. Priyanka’s mother Madhu Chopra has finally come out and has cleared the air, ending speculations about any rift. When asked about the rumors of a split between Priyanka and Nick, her mom, Dr. Madhu Chopra, said, “It’s all rubbish, don’t spread rumors.” She didn’t say anything else but her small statement was enough to end these speculations.

Meanwhile, many optimistic fans have been calling it a promotional stunt for one of her new projects. But neither PeeCee nor anyone from her team gave any clarification on the same.

Donald Trump Is Sworn In as President, Capping His Swift Ascent

Valentino Rossi: Maverick Vinales can fight for title with Yamaha

Valentino Rossi: Maverick Vinales can fight for title with Yamaha