Social media is an amazing place, especially for celebrities as it helps them to connect with their fans. However, while social media could be very rewarding for some players, on the other hand, it could also be a very rude place for others.

Over the years, we have seen out-of-favor Indian all-rounder Stuart Binny receiving unnecessary criticism and trolling on social media. It won’t be wrong to say that he is one of the most loved targets of trolls. No matter what he does, he often finds himself at the receiving end of trolling as his haters never leave any opportunity to take shots at him.

Recently, Stuart Binny, who has been toiling hard in the Domestic circuit achieved an amazing milestone in his cricketing career as he achieved the 100 List A games milestone. He got the biggest cheer from his wife and one of India’s leading sports anchors Mayanti Langer.

Mayanti took to her social media and took a sly dig at all the trolls and haters after Stuart Binny achieved the milestone of playing in 100 List A games. She shared a screenshot of her Instagram story, where she congratulated her husband and wrote:

“A 100 that has been 17 years in the making. HARDWORK and PERSEVERENCE are only words until you bring them to life. Some just TALK @stuartbinny84 WALKS THE TALK. Congrats on yet another achievement champ.”

“To the haters, but mainly to the supporters” 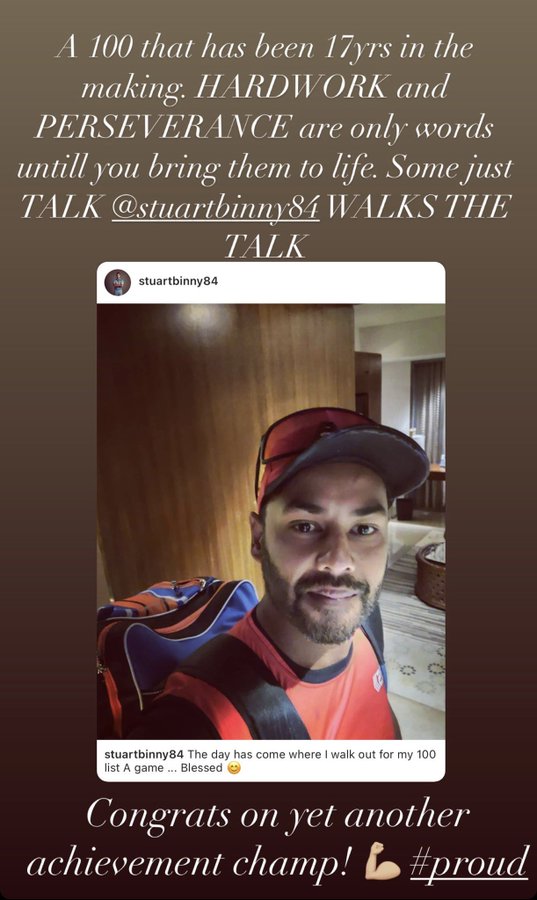 To the haters, but mainly to the supporters 🙏🏼 pic.twitter.com/kTZ8brUwJw