Famous Comedian Kapil Sharma recently shared a photo with his daughter Anayra Sharma in his recent Instagram post on Monday. He welcomed his daughter with his wife, Ginni Chatrath in 2019.

Recently, Comedian Kapil Sharma shared a picture with his daughter Anayra Sharma On Instagram. His daughter was born in 2019. He captioned the picture saying  ‘my little world.’

In his latest and cutest post, he is seen wearing a sweatshirt with a white cap and his daughter wore a frilled pink top with blue jeans. They both are looking adorable.

He captioned his Instagram post, “My little world” referring to his daughter. Actor Archana Puran Singh commented, “Anayra, she’s gorgeous! Look at the expressions on her face” on his post. 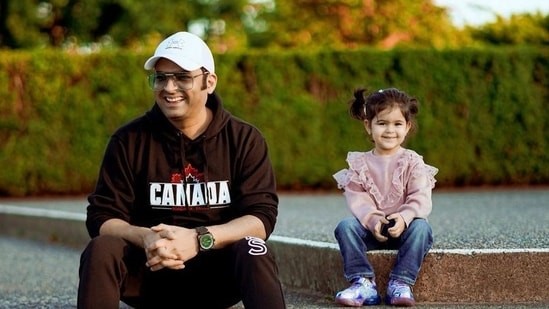 And many other actors dropped heart emojis on his post.

One of his fans commented,

“Your little world is glowing.” Another fan wrote,

“Love from Pakistan.” Others wrote,

Kapil and wife Ginni Chatrath are also parents of their one-year-old son, Trishaan.

Talking about the bonding between his two kids, Kapil said,

“Anayra is very protective of her brother. They are too young right now to fight with each other and she treats him like a kid brother, saying ‘he is my rabbit’.”

He had recently talked about  Anayra’s reaction to him being on television as well. He told ETimes in an interview,

“Anayra watches my show and says, ‘Papa is on TV. Ismain Kaun si Badi Baat hai (what is so special about it), I am also on TV.’ She says this because my wife constantly makes videos with her and uploads them on social media or her phone and when she sees them, she feels that she is on TV.”

On the work front, Kapil was last seen in his stand-up comedy special titled I Am Not Done Yet on Netflix. It also had his wife Gini Chatrath roasting him from among the audience.