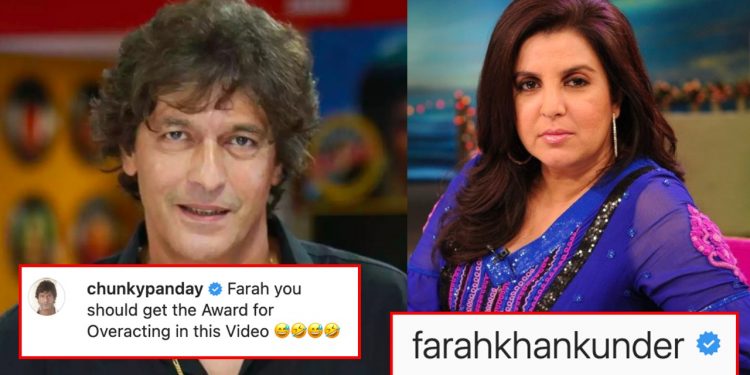 Ananya Panday has been one of the leading young actors in the film industry at present. While she has been under the spotlight for multiple reasons she still remains one of the most talented young actresses in the industry. Coming from a house of film stars, as the daughter of Chunky Panday, she has been pretty active on social media, with quite a lot of pictures depicting her personal space as well as the time she spends from a professional standpoint as well.

With a host of projects lined up, we will be seeing Ananya pretty active in the coming months. But a video she recently posted on her social media has got viral because of a comment war between her father and noted director Farah Khan.

One of the videos that Ananya recently posted, which was a pretty hilarious one showed her spending some time with Farah Khan. The video saw Ananya in a green dress getting her makeup done, introducing herself as Ananya Panday, to which Farah said that she won a national award for Khaali Peeli, after which she said I’m just joking, taking a play out of her father’s dialogue as the hilarious character “Aakhri pasta”. It was a rather hilarious video, and she posted it with the caption saying ” 50 repay kaat overacting ke. Always a fun time with Farah Khan”.

Naturally, the video got loads of comments from her fans and fellow co-stars. Her father was also one of them. Taking to the platform, he commented, with a message to Farah, saying that it should be Farah who should be getting the national award. But for overacting.
Not one to take anything lying down, Farah shot back in her typical no-holds-barred way. She replied by saying “apni beti ko sambhaal pehle”. This was clearly a dig at the young actress and was a pretty aggressive one at that as well.
Naturally, the exchange went viral. A vast majority of the fans went crazy about Farah’s response. People were suggesting that she destroyed the actor in seconds. Even Bhawna Panday, Chunky’s wife, could not help but laugh at the situation. Safe to say Farah won this exchange with a thumping majority.
Tags: Chunky PandayChunky Panday latestChunky Panday newsFarah KhanFarah Khan latestFarah Khan newsFarah Khan twitterfitting replyTwitter news