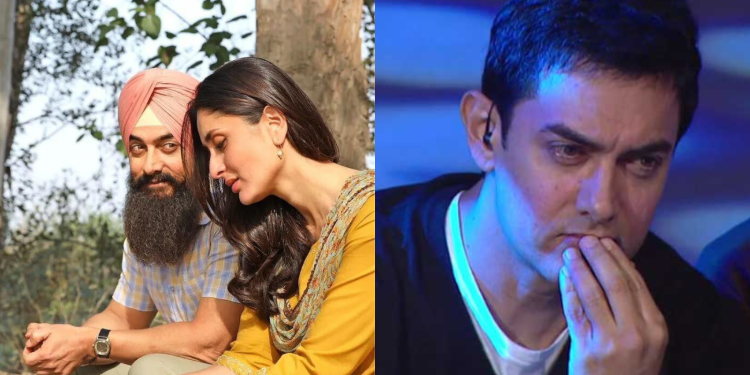 Complaint filed against Aamir Khan and others in Delhi over the depiction of the Indian Army in his latest film Laal Singh Chaddha.

Aamir Khan and his latest film Laal Singh Chaddha, which was released in theatres on August 11, are in legal trouble.

A complaint has been filed against the actor of the movie, the film, and others involved with it for allegedly ‘disrespecting the Indian Army and hurting Hindu sentiments. Aamir khan portrays the role of Laal who works as an Indian Army personnel in the movie which is one of the several professions he takes up in his life. A Delhi-based lawyer registered a complaint to Delhi Police commissioner Sanjay Arora on Friday, alleging that the portrayal of the Indian Army in Laal Singh Chaddha has disrespected the armed forces. The complaint was filed against Aamir, who is one of the producers of the film and is portraying the main character, along with Paramount Pictures, and director Advait Chandan.

Reportedly, advocate Vineet Jindal in his complaint to Delhi Police alleged that there was objectionable content in the movie. He registered an FIR under sections 153 (wantonly giving provocation with intent to cause riot), 153A (promoting enmity between different groups), 298 (wounding the religious feelings of any person), and 505 (statements conducing to public mischief) of the IPC against the concerned parties.

In his complaint he said

“In the movie, the makers have depicted that a mentally challenged person was allowed to join Army to fight in the Kargil War. It is a well-known fact that the best army personnel were sent to fight the Kargil war and rigorously trained army personnel fought the war but the movie makers intentionally depicted the said situation to demoralize and defame the Indian army.”

“I offer Namaz and pray, Laal, why don’t you do the same?” and the latter replied, “my mother said all this puja paath is malaria. It causes riots.”

The advocate said the dialogue is a defamatory statement aimed at the whole Hindu community. The complaint also said the statement is not only instigating and provokes sentiments but also causes ‘enraged emotions among the Hindu religion followers.’

“This statement shows his intent of waging war and activating enmity between different groups on the grounds of religion which is against the ideology of a secular democratic country like and also mischief against the Indian army which is a criminal offense as per the law of the land.”

Former England cricketer Monty Panesar recently watched the movie and made similar comments about Laal Singh Chaddha. He took to Twitter to talk about the film. Monty, who has his roots in the Indian state of Punjab, said,

“Forrest Gump fits in the US Army because the US was recruiting low-IQ men to meet requirements for the Vietnam War. This movie is a total disgrace to the Indian Armed Forces Indian Army and Sikhs !! Disrespectful. Disgraceful. #BoycottLalSinghChadda.”

Laal Singh Chaddha features  Kareena Kapoor Khan, Mona Singh, and Naga Chaitanya and is the remake of Tom Hanks-starrer Forrest Gump (1994). The film had been facing backlash and calls for a boycott on social media due to some comments Aamir had made about India a few years ago. Reportedly, Aamir reacted to it at a recent press event, and said,

“I feel sad that some of the people who are saying this, in their heart, believe that I am someone who doesn’t like India. In their hearts, they believe, but it is untrue.”