Asha Bhosle shared a glimpse of her restaurant in Dubai, named Asha’s. The evergreen singer is looking over the dishes in the kitchen and adding her personal touch as shown in the video.

88-year-old veteran singer s not only a great singer but also a wonderful cook. Recently she shared a glimpse of the newly-launched outlet of her restaurant chain named Asha’s, in Dubai. It is a new addition to Asha’s 20-year-old chain of Indian cuisine restaurants located across the world.

The latest video shows Asha entering the kitchen and adding her personal touch to the food that is being prepared for the guests.

The legendary evergreen singer shared a video on her Instagram handle in which she is wearing a chef’s coat and looking over a rice dish in the kitchen. She is seen smelling the dish after having a look at it. 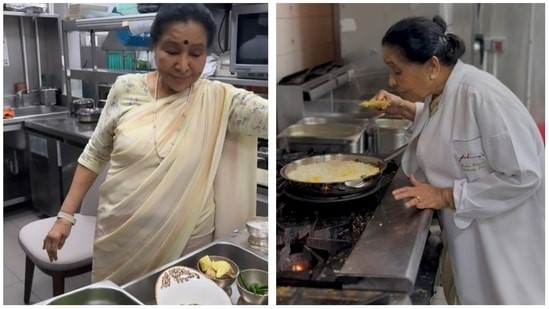 “Gana (singing) and khana (food) deadly combination, both are near to heart.”

Another fan of the singer wrote,

“Now you can be remembered as a legend musical chef.”

Asha shared another video to give her fans a better look at the Dubai restaurant. That video was originally shared by her granddaughter Zanai Bhosle. In that video, we can see Zanai entering the restaurant, which has comfortable seating ahead of the dining area. It has Asha’s black and white pictures on the walls.

Asha Ji is standing inside the restaurant and telling Zanai about something in the video. She is also seen preparing a dish with several spices spread in front of her.

The website of the food chain claims that Asha Tai personally ‘oversees the work of the restaurants’ to make sure the essence of her culinary philosophy is depicted in every kitchen and the experience of every customer.