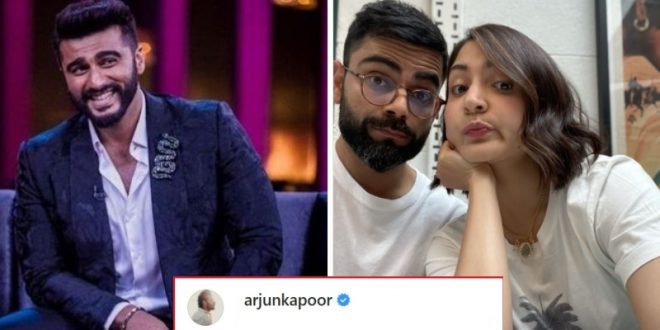 The Indian cricketer, Virat Kohli is currently enjoying his time off-field as he was rested for the 3-match T20I series against New Zealand. He is also not available for the upcoming Kanpur (1st) Test match as well but he will soon make a comeback in the team for the Mumbai test match.

On Sunday, Virat Kohli took to his Instagram and shared a selfie with his wife and Bollywood actress Anushka Sharma. In the pictures, the couple can be seen matching white T-shirts. Sharing the picture, Virat appreciated the love of his life by calling her his ‘rock’.

The Instagram post went viral in no time and was flooded with amazing comments from the ‘Virushka’ fans. However, the comment that left everyone in splits and stole all the attention came from Arjun Kapoor.

Arjun Kapoor, who is known for his hilarious sense of humor, is often seen poking fun at Anushka in the comments section of her posts. Replying to Virat’s post, Arjun Kapoor teased Anushka by calling her ‘Desi Dwayne’. He also asked Bollywood actor and his friend Varun Dhawan to give his opinion on it as Varun, who is a die-hard fan of Hollywood actor Dwayne Johnson whose stage name is The Rock. He wrote:

Talking about Anushka’s professional front, Anushka was last seen in Zeo, alongside Shah Rukh Khan and Katrina Kaif. The actor hasn’t signed a film since. However, she has backed a few projects as a producer including Paatal Lok and Bulbbul.

On the other hand, Arjun Kapoor was last seen in Bhoot Police. He will be seen next in Ek Villain 2.