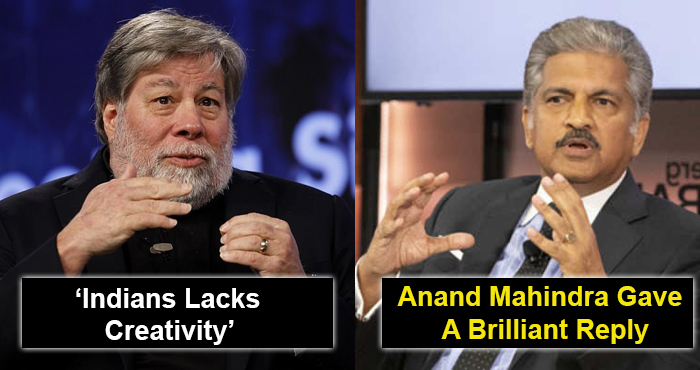 The chairman of Mahindra Group, Anand Mahindra is very active on social media. All thanks to his witty tweets and befitting replies, Anand Mahindra has become one of the favorite internet darlings. Time and again he has stood-p like a true Indian and has slammed those who tried to insult Indians.

The same happened when Steve Wozniak, the CEO of Apple, tried to insult Indians by taking a dig at the education system. He also claimed that Indians lack the ‘creativity’ factor in them.

Well, the bitter statements from steve disappointed many, including Anand Mahindra.

The statements didn’t go down well with Anand Mahindra, who decided to school Steve Wozniak for his controversial statements on us Indians.

Anand Mahindra took to his Twitter and gave a befitting reply to the co-founder of Apple. And looking at his reply, one can say that Mahindra really didn’t like the way Steve took a dig at Indians. Replying to an article featuring this piece of news, like a true Indian, Mahindra wrote:

“I love it when such comments are made. Nothing like a sweeping stereotype to get our juices flowing & prove it wrong. Thanks, @stevewoz Come back soon. We’ll make you sing a different tune.”

I love it when such comments are made. Nothing like a sweeping stereotype to get our juices flowing & prove it wrong. Thanks @stevewoz Come back soon. We’ll make you sing a different tune… https://t.co/Zy4QemamQJ

Anand Mahindra’s reply to Steve won the hearts of many. It is still regarded as one of the most wittiest replies from him. Here, check out how Twitterati had reacted to this fitting reply from Anand Mahindra. Have a look:

dear steve, u shud come back to india on a personal visit n visit some of the temples of south india, u will get to know what creativity is & that creativity is from an era when your nation prolly didnt even exist !!

well said this is called creative thinking . All these guys r just accepting what ever that guy saying without trying to think to find the counter argument.

I don't get it why that 30% of NASA are Indians line is flashed like a badge of honour. As an Indian I am ashamed that my fellow Indians prefer to showcase their talents in a foreign space agency and not in our own. We should soon try to make that figure 0%

#LFLo (Looking For Logic) Even if the “average Indian” lacks creativity, ~1/6th of “creative world citizens” are likely to be Indian [Hint:IQ, EQ, SQ are normally distributed in every (sub-)population]

While Indians don't lack creativity, think, we don't encourage creative thinking in classrooms & even culturally. We confuse obedience with discipline & children's questions or outofbox thinking is viewed more as an inconvenience & not cherished.