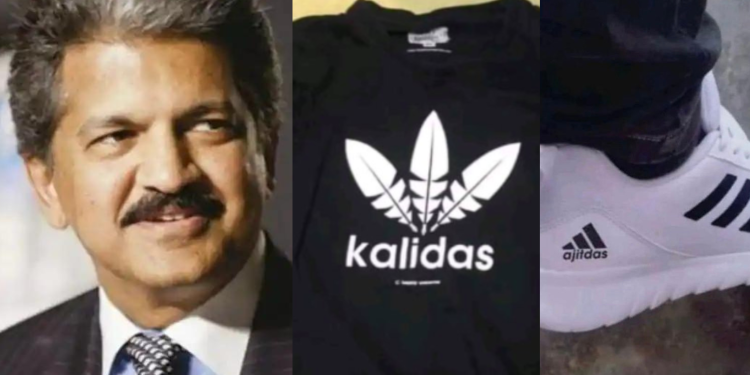 As we all know, after the implementation of Liberalization, privatization, and globalization policy in India, the country has been flooded with various foreign and luxurious brands that everyone couldn’t afford.

People across the country got obsessed with these brands over the years, and these brands also become household names in the nation with many other brands picking up similar brand names for themselves. As a result of this massive brand popularity and the hype amongst youngsters, cheap replicas of popular brands bombarded the market. Moreover, numerous people liked those cheap replicas as they looked almost the same as the real ones but at cheaper prices. While these low-cost replicas often have quite similar names, some names really astonish the buyers.

Recently, one such similar name attracted the attention of the renowned industrialist Anand Mahindra.

The chairman of Mahindra Group has an interesting personality and people admire him a lot. He is really very active on social media platforms, especially Twitter and he recently posted a photo of one replica product that featured the famous footwear brand logo with a funny alteration.

Taking to Twitter, Anand Mahindra shared an image of a white sneaker that resembles Adidas footwear with its logo and the three-stripe trademark

However, if you have a closer look, you will find that Adidas is really written as “Ajitdas” on the fake sneaker.

Anand Mahindra punned about how the name is “completely logical,” even though people will find it weird.

Along with the photo, he wrote,

“It just means that Adi has a brother called Ajit. Vasudhaiva Kutumbakam?”

The post grabbed a lot of attention and just in minutes, the tweet got flooded with comments. While a section of people in the comment section laughed about the absurdity of these cheap products, others provided images of exact copies and some other cheap replicas of the same brands.

Have a look at some other amusing reactions:

Sir more power to Vasudhaiv kutumbkam as adi has a sister too "Ada" along with brother "Ajit" 😇😇 pic.twitter.com/ue9RlFc0Vz

and here is the sister of Bisleri . .🙏 pic.twitter.com/uRZF2yOz8D

They also have an extended family !! pic.twitter.com/ZlPP7GFOVi

We used to make fun talks during our college days Adi & Das two Indian brothers started Adidas abroad and It has roots from India.. Good to see your tweet 😄☝️

You should take a promotion fee from AJITDAS. 😉