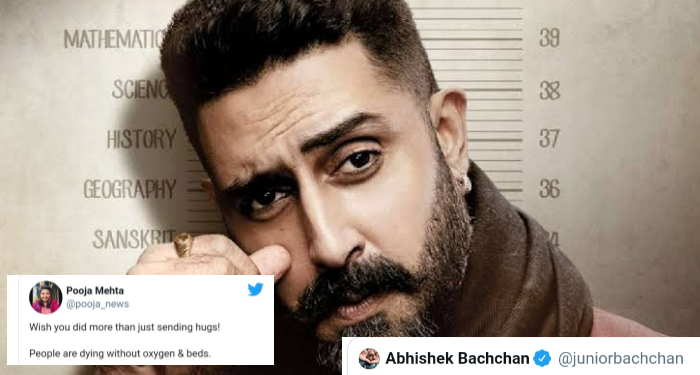 Bollywood actor Abhishek Bachchan is known for his outspoken responses on social media. Junior Bachchan knows when and where to elevate himself and exactly in which manner. Recently we got to witness something very akin to that when a user tried to troll him.

Actually, Abhishek made a tweet amidst the corona virus epidemic and through this he sent a virtual hug to everyone on the social media platform. He also said to retweet and spread love. In such a time, we need it.

While many people liked this method of consecration, but still there were some people who did not wish understand it. A user criticized the actor saying, ‘I wish you had done something other than just sending the hug! People are dying without oxygen and beds. The hug is not enough, sir.’

Responding to this, Abhishek wrote, “I am doing ma’am. Since I am not putting it on social media, it does not mean that I am not doing anything. We are all trying to do our best, whatever we can. Situation is very sad, so I thought that a little love and positivity can help. ”

Here it was evident that the user thought Abhishek is not doing anything for Covid based on the fact that he wasn’t sharing things on his social media. Abhishek in his usual calm and composed way clarified the things for her.

Anointing to work front, then Abhishek last appeared in” The Big Bull. In this, his performance was well liked. Director Kuki Gulati’s film was based on the life of the stockbroker Harshad Mehta and his crime. Abhishek Bachchan as Harshad Mehta was welcomed by most of the people, while some still drew out comparisons between Scam 1992 and The Big Bull only to belittle the efforts of Junior Bachchan.

Here’s sending out a huge virtual hug to you all.
RT and spread the love.
In times like these, we need it. #MaskOn

Wish you did more than just sending hugs!

People are dying without oxygen & beds.

I am, ma’am. Just because I don’t put it on social media doesn’t mean I’m not doing anything. We all are trying to do our best and whatever we can. The situation is very sad, hence felt spreading a little bit of love and positivity could help. 🤗