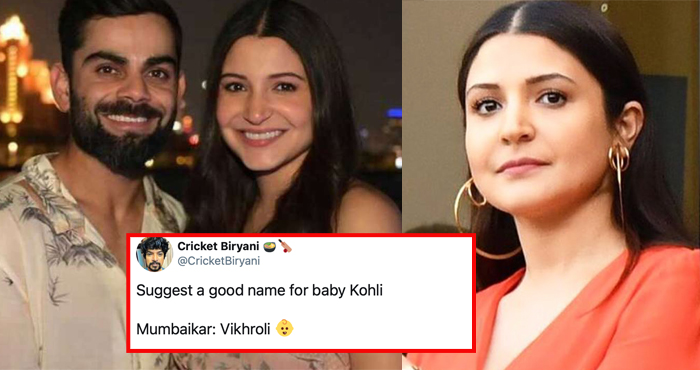 On Monday, January 11, Virat Kohli took to his social media and shared the news of becoming a father. He expressed the feeling as beyond ‘blessed’. Virat wrote:

“We are thrilled to share with you that we have been blessed with a baby girl this afternoon. We thank you all for your love, prayers, and good wishes. Anushka and the baby are both healthy and we are feeling beyond blessed to start this new chapter of our lives. We hope that you can respect our privacy at this time.
Love, Virat.”

Ever since the couple announced the big news, they have been receiving congratulatory messages and blessings from the fans, celebrities, and cricketers around the world.

Meanwhile, though the couple requested some privacy at this time but there have been reports floating around in the media that claim that the couple has already named their little angel and it is as beautiful as it gets.

Well, as per a news portal named ‘Peeping Moon’, the couple have named their baby ‘Anvi’, which is a combination of both their names. Also, the meaning of the name in Sanskrit is one of the names of Goddess Mahalaxmi. Anvi also denotes someone who is the Goddess of the Forest.

Meanwhile, by the time Virushka makes an official statement regarding the name of the baby, social media is abuzz with fans coming up with suggestions of the names of the newborn angel.

Here, check out some of the names fans came up with, have a look:

@imVkohli
Congratulations
Sir , vinuska is the best name for your baby girl.

Like @BrianLara 's daughter name Sydney, can Kohli's daughter's name be same as she is born on a day when his Dad's team fought incredibly in Sydney! 😀 Congratulations to skipper @imVkohli n @AnushkaSharma.The baby girl will be sharing her B'day with one of papa's heroes Dravid

Congrats to @imVkohli
and @AnushkaSharma
blessed with a baby girl 😍.

@AnushkaSharma @imVkohli it might be little old fashioned but i suggest a name (*Anuvira*) for the baby girl.. a combination of the cute couple.. #virushka #anuvira