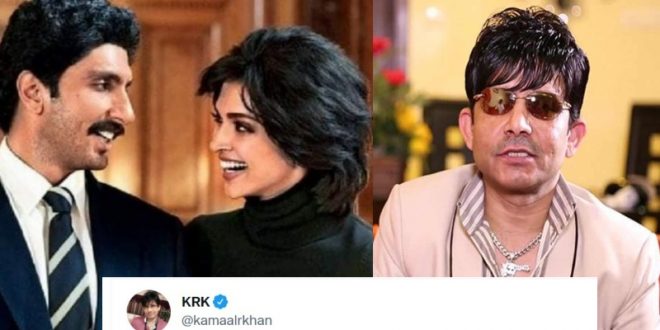 The trailer of the much-awaited movie ’83’ was finally released on Tuesday. The movie ’83, directed by Kabir Khan, brings the story behind the historic World Cup win of 1983 to the big screen and the trailer of the movie has received a thrilling response from the fans. In fact, the trailer itself gave the country a chance to relive India’s first cricket World Cup triumph again.

The internet has been buzzing with praises for the actors who will be seen stepping in the shoes of Indian cricketers, especially Ranveer Singh who is portraying the role of Kapil Dev, the man who led the World Cup-winning team.

Meanwhile, after the trailer of the movie came out, fans on social media came up with hilarious memes and jokes, while appreciating the performances of the actors on social media. Among many, controversial Bollywood celebrity Kamaal R. Khan also joined the bandwagon and took a hilarious dig at Deepika Padukone.

KRK took to his social media and shared a picture of Ranveer Singh and Deepika Padukone from the movie, where she will be portraying Kapil Dev’s wife. Sharing the picture, KRK trolled Deepika Padukone over her look in the movie and compared her to Pakistani cricketer Ramiz Raja.

Kapil Dev and Rameez Raja are looking good in this photo! pic.twitter.com/QQspsJSb2v 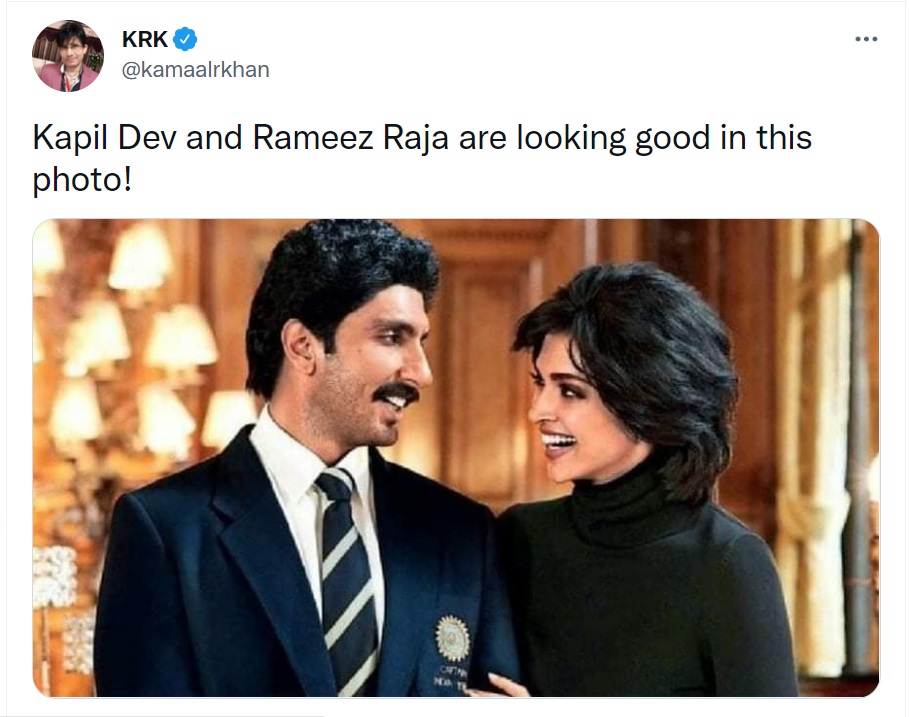 Meanwhile, the trailer recently crossed 50 million views on YouTube. It was the first Hindi trailer to cross 50 million views on YouTube in 24 hours! Expressing gratitude to his fans, Ranveer Singh took to his social media and shared a note, where he wrote: “Thank you to movie fans all over the country and beyond, our film fraternity, the press…people from all walks of life and generations have appreciated the movie’s trailer and we are filled with gratitude and gladness. This is not just a movie- it’s a glorious tribute to that moment in Indian history that changed it all!! It’s about the great achievement of the Indian cricket team of 1983 — ‘Kapil’s Devils’ ! These men are legends and it’s an honour to be a part of the cinematic telling of their iconic story on the big screen.”

“Once again, thank you from the bottom of my heart for your generous and loving messages! Kaptaan Kabir Khan, it’s everything you dreamed of! Take a bow!” The note was captioned, “Thank you all !!!” 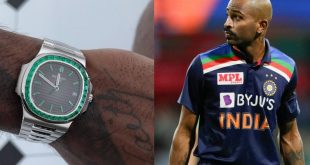 India’s star all-rounder Hardik Pandya is one of the highest-paid Indian cricketers. Apart from his …