A day after pop sensation Rihanna and climate activist Greta Thunberg took to their social media and showed their support to the ongoing ‘farmers’ protest’, the Indian batting legend took to his social media and opposed foreign interference in India’s affairs.

It happened after Rihanna shared a news story on the current state of farmers’ protest and asked why is no one talking about the issue. She wrote:

“why aren’t we talking about this?! #FarmersProtest”

why aren’t we talking about this?! #FarmersProtest https://t.co/obmIlXhK9S

What in the human rights violations is going on?! They cut the internet around New Delhi?! #FarmersProtest pic.twitter.com/a5ml1P2ikU

Master Blaster took to his social media and led the ‘India against propaganda’ drive-by calling for unity among the citizens of the country.  In his tweet, Sachin urged the citizens to shift their focus on the efforts being made by the Indian government. He also opined that the external forces can only be spectators and not participants. Sachin wrote:

“India’s sovereignty cannot be compromised. External forces can be spectators but not participants. Indians know India and should decide for India. Let’s remain united as a nation,”

India’s sovereignty cannot be compromised. External forces can be spectators but not participants.
Indians know India and should decide for India. Let's remain united as a nation.#IndiaTogether #IndiaAgainstPropaganda

As soon as Sachin’s tweet went viral, several other cricketers and celebrities joined the ‘India together’ drive and expressed solidarity with the Indian government. The Indian skipper, Virat Kohli also took to joined the debate and expressed his thoughts on the same. He wrote:

“Let us all stay united in this hour of disagreements. Farmers are an integral part of our country and I’m sure an amicable solution will be found between all parties to bring about peace and move forward together. #IndiaTogether”

Let us all stay united in this hour of disagreements. Farmers are an integral part of our country and I'm sure an amicable solution will be found between all parties to bring about peace and move forward together. #IndiaTogether

several other cricketers and Bollywood celebrities including the likes of Akshay Kumar, Ajinkya Rahane, Sunil Shetty, Anupam Kher, Suresh Raina, Ravi Shastri, Rohit Sharma, and many others joined the drive and proved that the nation comes before.

Here, check out the tweets:

Agriculture is a very important part of the machinery of the Indian economic system. Farmers are the backbone of any country’s ecosystem. This is an internal matter which I’m sure will be resolved through dialogue. Jai Hind!  #IndiaStandsTogether #IndiaAgainstPropoganda 🇮🇳

As the world's largest democracy, India is more than capable of taking her internal issues to amicable solutions. Onwards and upwards. #IndiaTogether#IndiaAgainstPropaganda

Farmers constitute an extremely important part of our country. And the efforts being undertaken to resolve their issues are evident. Let’s support an amicable resolution, rather than paying attention to anyone creating differences. 🙏🏻#IndiaTogether #IndiaAgainstPropaganda https://t.co/LgAn6tIwWp

Don’t fall for any false propaganda against India or Indian policies. Its important to stand united at this hour w/o any infighting 🙏🏼#IndiaTogether #IndiaAgainstPropaganda

We must always take a comprehensive view of things, as there is nothing more dangerous than half truth. #IndiaTogether #IndiaAgainstPropaganda @hiteshjain33 https://t.co/7rNZ683ZAU 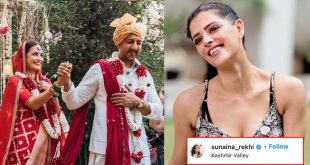 Dia Mirza, the woman who won her place in our hearts with the beautiful depiction …