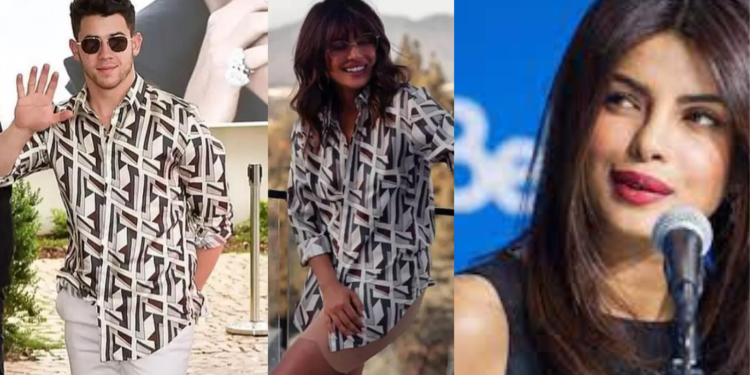 Priyanka Chopra recently revealed that everyone has spotted her in husband Nick Jonas’ clothes on numerous occasions but that’s not it. There is a lot more that she ‘steaL’ from him. She further added that Nick’s shoes don’t fit her, else she would have stolen them, too.

Priyanka and Nick live with their six-month-old daughter Malti Marie Chopra Jonas in Los Angeles. Lately, during the shoot of her web series Citadel in different locations, Priyanka was spotted wearing Nick’s jackets.

In conversation with Elite Daily, Priyanka talked about sharing clothes with Nick, Priyanka said that she steals almost ‘everything’ from his wardrobe. She said

“I wear my husband’s clothes all the time. I just don’t fit into his shoes, otherwise I would take all his shoes too. He wears cords and sets, and I’ll wear his jackets. I steal his sunglasses,”

Revealing  that she has worn more clothes of Nick than her fans have spotted her in, she said, “

You can’t tell sometimes which ones I’ve taken. He just has really great clothes.”

Priyanka posted a collage of her and Nick’s pictures.

Priyanka once posted a collage of Nick and her in which they wearing the same outfit on different occasions. Sharing it on her Instagram Stories, she captioned it saying

“Where it started… Where it ended up…” 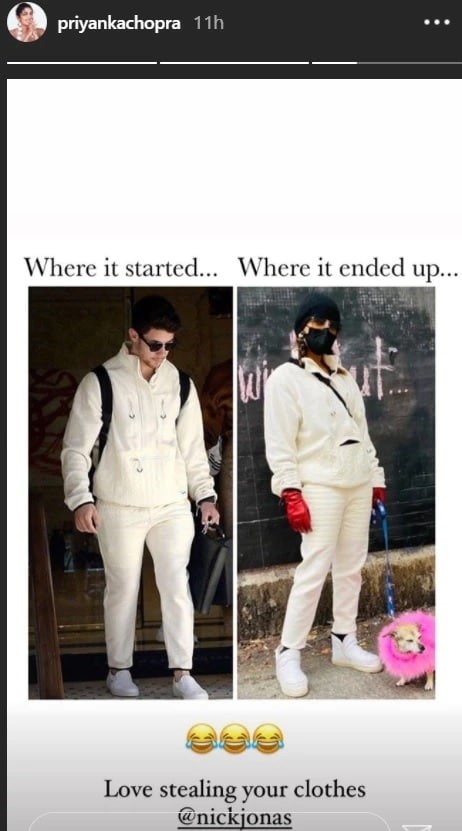 Nick was seen travelling in a white track suit, which was later worn by Priyanka as she stepped out with her pet dog, Diana.

love birds were recently spotted in Mexico with their daughter Malti as they celebrated Priyanka’s birthday. In a recent interview with The New Indian Express, Priyanka’s mother Madhu Chopra revealed that Nick gives Malti a bath and also changes her diapers, while she gives massage to her granddaughter.

The talented Actress will next be seen in Russo Brothers’ production, Citadel. She will also be seen in Hollywood films Ending Things and It’s All Coming Back To Me. She has also signed Bollywood film Jee Le Zaraa with Alia Bhatt and Katrina Kaif. The film is yet to release on  box office..