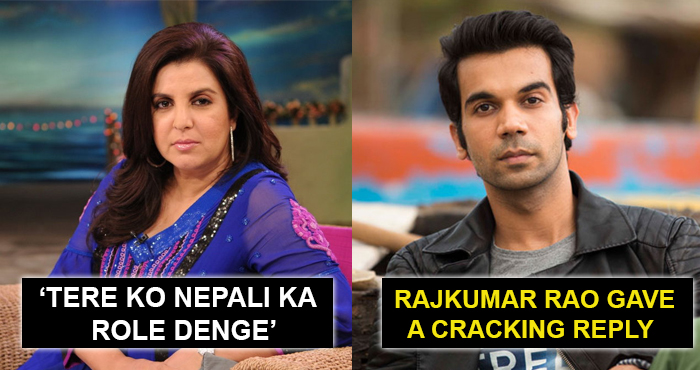 Despite the breaking of stereotypes in the modern world, it seems that Bollywood is still stuck in the same old stagnant place that judges people based on their beauty and physical characteristics. With the untimely passing away of Sushant Singh Rajput, despite nepotism drawing severe flak, all the heat boiled down pretty soon and it eventually turned down into a slugfest of media and commoners to prove Rhea Chakraborty as a culprit, if not for the murder but with something else maybe, whatever fuels the steam in their sails.

In one such incident that raked the Bollywood recently, a show of prejudice took the entire industry by storm and it sparked pandemonium of the highest order. Despite the best of attempts for the people to showcase that they are right up there with the modernization where they should be, their ugly mentality rears its head at times and it breaks all hell loose.

In a recent confab between Farah Khan and Rajkumar Rao on a Youtube channel called Film Companion, Rajkumar Rao was asked about his struggle with rejection due to a relatively darker skin tone. A few topics which were predominant throughout the show were scandals, nepotism, and double standards of the industry.

When Rajkumar Rao was asked about his skin tone, he replied, “I didn’t use Fair and Lovely. I was very proud of my skin colour. I am an actor. I am not here to sell my fairness. I used to laugh, actually. I found those people so ignorant. So regressive. They are still stuck in that era – hero matlab gora chitta, 6 foot.”

Until this, the confab was pretty friendly and it started catching steam while talking about rejection for a movie where the character that Rao was supposed to play was a Parsi role and he was snubbed for not looking like a Parsi.

Here Farah Khan, who is a Parsi herself chipped in with a prejudicial remark, citing, “But you have to look like a Parsi, no?”

Rajkumar Rao adhered to his professional norms and replied in an extremely calm tone, stating that how Naseeruddin Shah had earlier played a Parsi Role despite not being from the community.

Farah’s response was as naïve as it could be and she stated, “He has a Parsi nose. He looks exactly Parsi and behaves Parsi also.”

The choregrapher started getting irked due to the paucity of sensible replies and she blurted out citing, “But sometimes it is also to do with how you look. If you are playing an African-American, you can’t play it.”

Unfortunately for Farah, Rajkumar Rao even had a response to this as he cited the example of Robert Downey Jr playing an Afro-American character in Tropical Thunder.

No matter how much Rajkumar Rao tried to assert the point that playing a role depends on one’s flair and not his facial expressions, Farah Khan got agitated further and asked, “Terko Nepali ka role denge toh?”

It seemed that as much as Farah Khan was opening her mouth, she was exposing her illiteracy about good movies and a deeply-rooted prejudice against black people. Rajkumar Rao once again silenced her on her last question by saying that Amir Khan portrayed the role of a Nepali fellow without the physiognomy.

No matter how forward we cruise, it seems that our brains will always be entrenched in the dark ages with our fashionable outfits on.