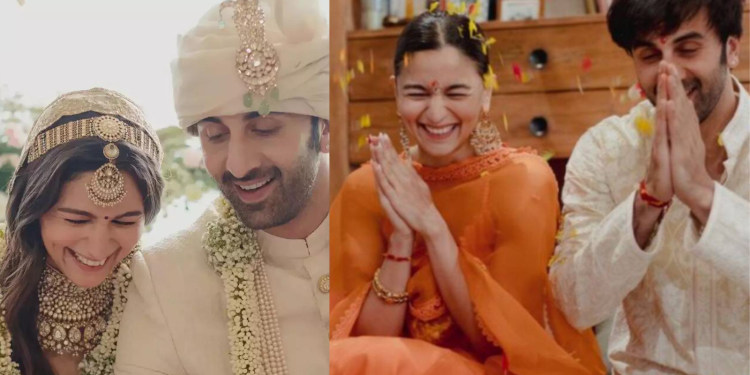 Bollywood  Diva Alia Bhatt talked about her husband Ranbir Kapoor once again and addressed him as her best friend. The love birds tied the knot on April 14th  this year and are expecting their first child. They were dating each other for quite a long time. Recently Alia expressed how marrying Ranbir has made her life stress free even though nothing has changed between the two.

Alia and Ranbir will be seen together in filmmaker Ayan Mukerji’s Brahmastra for the first time on screen. During the shoot of the movie, the two fell in love with each other and their romance was the talk of the town. Moreover, they initially avoided telling Ayan about their relationship and were scared that he would freak out. After so many years of dating and coming out in public as a couple, Ranbir and Alia finally got married on 14th April 2022 in Mumbai in an intimate ceremony.

In late June, the couple announced the news of Alia’s pregnancy for which they were trolled by some people as well.

When asked about life after marrying RK, Alia told Filmfare,

“He is my best friend, so after marriage, nothing has changed between us. He is the same person. Jitni taareef karun kam hi hai. As a husband and as a life partner, it’s a complete set of adjectives that I can use for him. He always supports me. Mujhe bahut hansaate hain. All of my concerns have vanished after getting married to him.”

“As an actor, I have so much love and respect for him. Ranbir is the easiest actor to work with. He is always very calm on set. He is the most punctual. He is also so accommodating and so giving. When you shoot with Ranbir, you can feel silent energy. You don’t feel his stardom or his presence in that overbearing sort of way. It’s so natural and it’s so calm,”

A few days ago, Alia posted an unseen picture of Ranbir from the sets of Brahmastra and praised him as her co-actor.

Alia’s latest outing is Netflix’s Darlings which is getting mixed reviews from the audience. Featuring  Vijay Varma and Shefali Shah, the dark comedy depicts a strong message against domestic violence against women. Ranbir was last seen in Shamshera and unfortunately, the movie couldn’t do well at the box office.