A Woman Asked SRK “Can I Kiss Your Dimples?” And King Khan Gave A Witty Reply 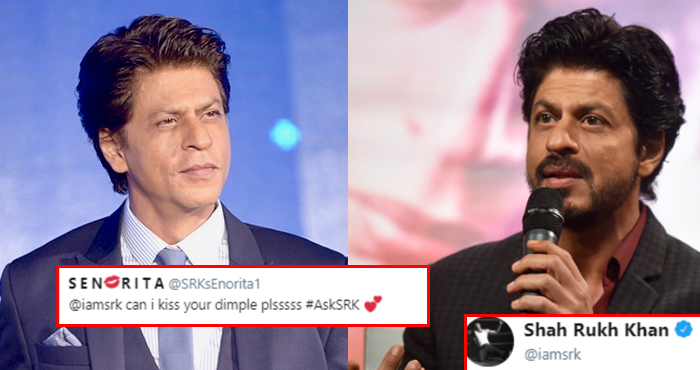 Being a celebrity from the B-town is synonymous with countless awes and admirations. Fan-crushes are a widespread spectacle and stars eventually get used to it.

However, being the Badshah of Bollywood and the icon of romance, it comes with a lot of fandom. Shahrukh Khan is the king of the B-Town and the way he has been preserving his legacy has been nothing short of incredible.

It is a frequent scene where he conducts Question and Answer sessions on the social media platforms and answers zillions of questions from the fans.

The way he handles the questions is awe-inspiring, never losing his calm and always staying unfazed, blending humour with gravity which only the king is capable of doing.

A female fan asked him whether she can kiss his dimples to which he responded that he was at home and his dimples were booked by his family.

Someone asked a clue about his upcoming movies and he responded that he will announce them once he signs it.

Another fan wanted him to get a girl friend for the former and Shahrukh said that the fan must do his own work.

Shahrukh jokingly compares himself with the thermos when a fan asked why is he so hot.

When someone wanted to be his personal doctor, he said that its sick.

A fan wanted SRK to come to his or her home and Shahrukh sent his love and respect to the fan’s mother.

A fan responded quoting that he saw SRK in Baazigar since then he became a fan. Now his grand kids also became SRK’s fan watching Fan. SRK cited that they bot got old together.