8 Times Diljit Dosanjh Roasted His Trolls Like A True ‘Pahji’ 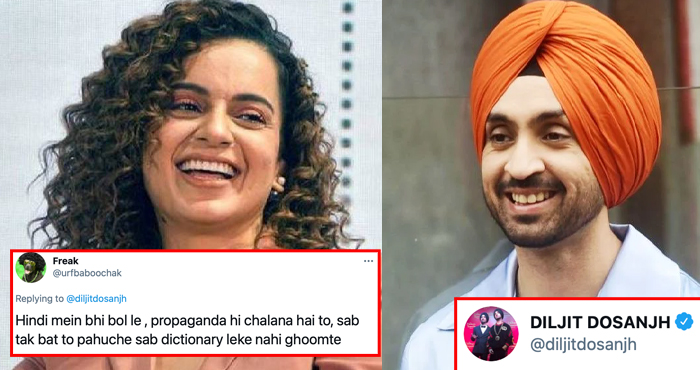 Bollywood and Punjabi actor and singer Diljit Dosanjh has created a stir on social media ever since he blasted Bollywood actress Kangana Ranaut. However, for those of us who have been following Diljit Dosanjh, know that he has always been the king of savage comebacks. He is known for his sense of humor and wittiness.

Here, in this article, we bring you a list of 8 instances when Diljit Dosanjh stole the show and our hearts with his savage comebacks. Have a look:

Diljit Dosanjh’s recent replies to Kangana Ranaut have created a stir on social media and have brought life to the entire internet. For the very first time, we saw a celebrity taking a stand against her so strongly.

Well, it all started after Kangana Ranaut shared a picture of an elderly woman from the farmer’s protests and called her Bilkis Bano, who became the face of Shaheen Bagh protests. The actress went on to insult the woman in an extreme way.

Kangana’s tweet didn’t go down well with Diljit Dosanjh, who slammed the actress for the same. He responded to her by tweeting:

Kangana, who is known for not keeping quiet, steeped even lower and called Diljit ‘Karan Johar ke paltu’.

Following this, a war of words started between the two actors, and Diljit can safely be declared the winner of that.  and the rest is history. Check out the conversation below:

Soon, the comment caught the attention of Diljit Dosanjh, who came up with a savage reply to the troll. Diljit wrote:

3. Diljit Dosanjh on Koffee With Karan:

When Diljit appeared on the episode of Koffee With Karan, he owned the show with his kind nature and of course sense of humor. During the show, Karan Johar asked Diljit about his obsession with fashion.

4. Karan also asked Diljit Dosanjh about how he handles with female attention.

5. When he gave a perfect response to a hater who tried to insult him.

It happened when Diljit wished his fans on Prakash Utsav and a twitter user tried to insult him by writing: “Kabhi hindu festival ki bhi badhai de diya kr joode wale”. Responding to which, Diljit tweeted:

6. When Diljit Dosanjh refused a fan’s request during a concert.

Well, during a live concert, a fan asked Diljit to sing a sad song. Responding to him, Diljit hilariously said:

7. When a fan asked Diljit if he plays PUBG.

During an interaction on Twitter, a fan asked Diljit is he played PUBG. Responding to which, Diljit tweeted: