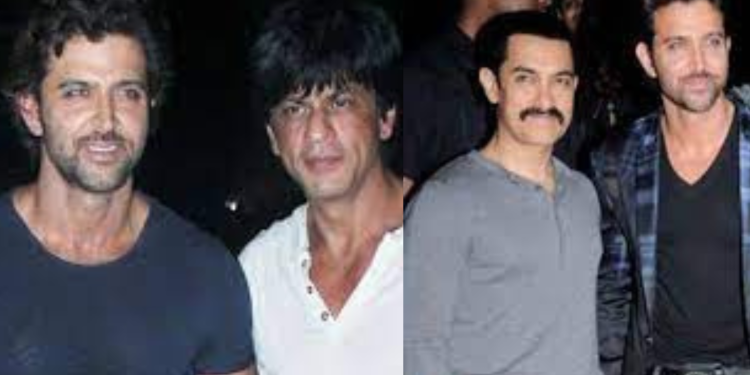 Trolling others for the sake of content and memes has become a trend now and Bollywood Industry and Bollywood actors are not new to it. They are the major target of the trolls most of the time.

Lately, we all know that the Hindi film industry is going through its worst phase at the box office with Boycott culture prevailing all over the country.

Every other day we keep seeing “Boycott Bollywood” trending on Twitter and other social media along with trolls going after a film or a celebrity.

Apart from that  Bollywood is also being criticized for lack of unity & not standing up for each other.

But you know there is one superstar who has always stood by his friends & colleagues in Bollywood without giving a damn about the trolls and that is none other than our handsome hunk Hrithik Roshan, who has again proved that why he is admired across the world. 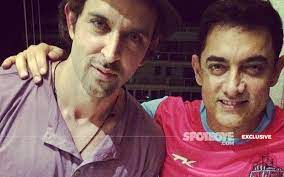 Hrithik Roshan was one of those stars who took to Twitter & extended support for the film & praised it asking his fans & followers to watch it.

He supported Aamir’s movie knowing that his film Vikram Vedha was up for release in a month & could face a boycott if he supported Laal Singh Chaddha. And that’s what exactly happened. Soon “Boycott Vikram Vedha”  started trending on Twitter.

Standing Up For Aryan Khan 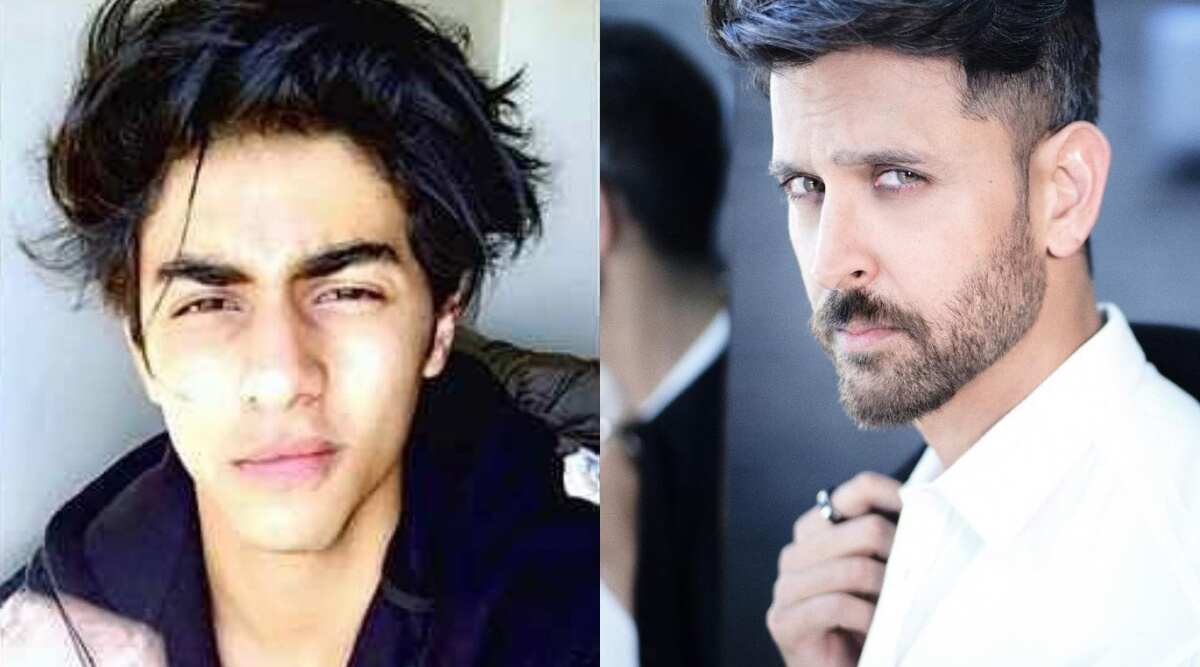 In 2021 Aryan Khan was embroiled in the drugs case. After that, a lot of celebrities came out in his support & the most popular and biggest name to publicly stand up for Aryan was Hrithik.

He shared a picture of Aryan & wrote,

“My dear Aryan. Life is a strange ride. It’s great because it’s uncertain. It’s great cause it throws you curve balls, but god is kind.

He gives only the toughest ones the toughest balls to play. You know you are chosen when amidst the chaos you can feel the pressure to hold your own.

And I know you must feel it now. The anger, the confusion, the helplessness. Aaah, the very ingredients that are needed to burn the hero out from inside you.

But be wary, those same ingredients could burn away the good stuff… the kindness, the compassion, the love. Allow yourself to burn, but just enough.

Mistakes, failings, victories, success… they’re all the same if you know which parts to keep with you and which parts to throw away from the experience. But know that you can grow better with them all. I’ve known you as a kid and I ’v knew you as a man. Own it.

Own everything you experience. They’re your gifts. Trust me. In a time when you connect the dots… I promise you, It’s gonna make sense.

Only if you have stared the devil in his eyes and kept your calm. Keep calm. Observe. These moments are the makers of your Tom.

And Tom is going to have a brilliant sun shining. But for it, you must go thru the dark. Calm, still, owning your own. And trusting the light. Within. It’s always there. Love you man .” 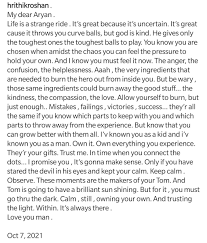 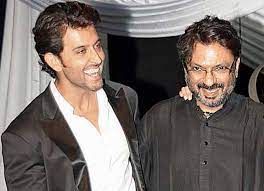 In 2017, when Sanjay Leela Bhansali was physically assaulted on the sets of Padmaavat, Hrithik was one of the celebs who came out in his support & tweeted,

“Did random people enter another person’s workplace n raise their hand on him because dey decides dey don’t like what he does? I am enraged!!!” 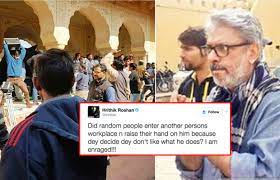 In 2010, when Shah Rukh Khan’s My Name Is Khan faced protest from Raj Thackeray’s MNS, Hrithik was the one who asked his fans & followers to watch the film.

“Spread humanity with a vengeance, GO WATCH MY NAME IS KHAN. ..and for the record, my name is HRITHIK ROSHAN.” 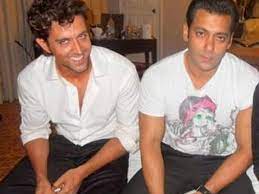 Back in 2014, Salman had a squabble with the paparazzi after it was alleged that his bodyguards roughed up the photographers at an event, a week before Kick’s release.

Paparazzi then decided to boycott Salman Khan & his film Kick.

At that time, Hrithik had tweeted in support of Salman & wrote,

“He Doesn’t need compliments. His Strength is his integrity 2 himself. A superpower who’s just being human. Go get your Kick guys.”

On the work front, Hrithik Roshan will be seen alongside Saif Ali Khan in Vikram Vedha directed by Pushkar-Gayathri. The film is all set to release on September 30, 2022.