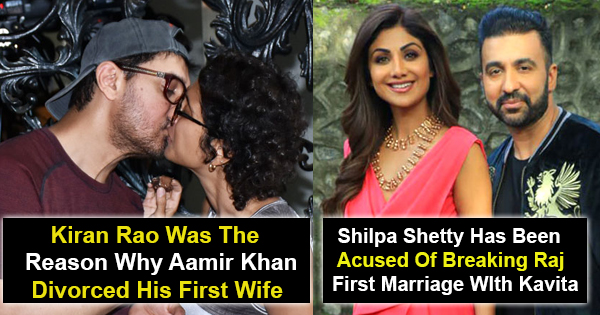 Bollywood is a world of glamour and finesse that attracts a lot of people and they want to be a part of it. However, at times, Bollywood becomes a part of their lives via the women who enter the fray as marriage breakers and eventually set a new home with these businessmen or actors. In the following lines, we will have a look at a few such actresses who turned out to be home breakers. The actress and fitness icon got married to Business tycoon Raj Kundra in November 2009. She was openly accused of breaking the marriage between Kundra and his ex-wife Kavita. The former undisputed queen of Bollywood married Yash Chopra’s son and eminent filmmaker Aditya Chopra. She was accused of forcing him to end his seven-year-old marriage with Payal Chopra, Aditya’s ex-wife. Kiran Rao met Aamir Khan on the sets of Lagaan and they both fall in love with each other. It got so intense that Aamir divorced his first wife Reena, whom he married at the age of 19, and is now settled with Kiran. The eminent actress was already when she declared about her relationship with ace Bollywood lyricist and poet Javed Akhtar. Javed left his wife and two kids to settle down with Shabana. She was introduced as his Rakhi sister by Boney Kapoor to his former wife Mona when she moved into their house. Later the two got married. However, Mona did not divorce Boney till the day she died. The former Bollywood siren fell in love with Anil Thadani and was the reason behind his divorce with his former wife Natasha. Her heavenly beauty was enough to break the home of Dharmendra who divorced his wife Prakash to settle down with Hema. She fell in love with Kamal Hasan when his wife Vani went to the USA to do a course as a makeup artist. The Italian model ensured that the relationship between Saif Ali Khan and Amrita Singh does not last. Raj Babbar divorced his first wife Nadira to marry Smita Patil. However, after the actress died during childbirth at the age of 31, Raj went back to his former wife.