As India has been fighting one of the toughest times in its chequered history, there are a few pictures that have been blooming smiles on the faces of the netizens. One such picture that depicted an act of humanity has won over the internet in sweeping fashion.

There have been countless incidents in the near past that have seen UP Police being defamed left and right for politically incendiary incidents that have tarnished their reputation. 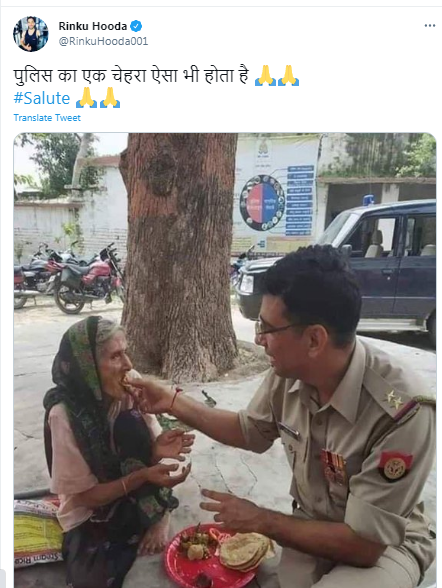 However, a recent incident that won over the internet was the exemplifying act of a UP police officer offering food to an old lady on the streets. In fact, he fed her like her own son.

This is au contraire to the regular posts that rule over social media tarnishing the reputation of the constabulary, indicting them for their inefficiency in certain cases or the others. This picture served as an example for all of those who only believe that police are supposed to bad.

The internet was deeply moved by this amazing gesture from UP police and the way they have heaped praises on this young man will be acting as a massive impetus for the entire police force not just across the state but also the entire nation to come together and help others.

This snap was first shared by Paralympian, Rinku Hooda on his official Twitter handle. He quoted on top of the post saying that there is another incarnation of police which is as exemplifying as this humane act.

Another tweet read that humanity is alive because of people like these. They serve as a burning example to others and inspire countless people to follow them.

Another user praised the culture and mentioned that such parents are fortunate enough and such acts will always serve as a reminder for humanity to be alive.

There was another tweet reading it was not the apparition of police but a human being and the dress is only of police.

A police officer also came to the post and commented that they are alive because humanity is alive and they will continue to serve humans.