Rishabh Pant responded to a claim by actress  Urvashi Rautela that someone named ‘RP’ waited for her for ten hours once.

Recently, Urvashi Rautela claimed in an interview that a certain someone (obviously Rishabh Pant)  named RP waited ten hours for her in a hotel lobby. Responding to those claims cricketer Rishabh Pant shared a note on social media talking about ‘lies’ people tell in interviews.

The controversies between actor Urvashi Rautela and cricketer Rishabh Pant aren’t new. Both of them stay in limelight every other day. But now the latest controversy is heating up to a great extent and seems to turn into a rivalry between the two. Recently, a few days after Urvashi claimed in an interview that a person she identified only as ‘RP’ once waited for her for hours in a hotel lobby, Rishabh seemingly took a dig at her on social media and deleted the post minutes later.

Previously Urvashi and Rishabh had a history together with the former miss universe appearing to claim in the past that she was dating the cricketer. There were also rumors that Rishabh Pant had promptly blocked her on social media. The duo has created a lot of buzz on the internet.  The two were dating each other at one point after being spotted together in Mumbai once a long ago.

In a recent interview with Bollywood Hungama, Urvashi shared an incident where someone waited all night to meet her. She said,

“I was shooting in New Delhi and I arrived at night. Quickly I had to get ready because actresses need more time to get ready. So, Mr. RP came to the hotel lobby and wanted to meet. Ten hours passed and I fell asleep. I couldn’t attend any calls and when I woke up I saw 16-17 missed calls and I felt so bad that someone was waiting for me and I couldn’t meet them. I told him we’ll meet when you come to Mumbai. We met in Mumbai but a huge drama happened with the paps and all.”

When asked who is RP, Urvashi said, “I won’t name him.” But many on social media said the lady was talking about RISHABH PANT, who is currently the wicketkeeper in the Indian team.

On Thursday, Rishabh shared a note on Instagram Stories, which a lot of people felt was a message for Urvashi. The cricketer, however, did not name the person just like Urvashi didn’t.

“It’s funny how people lie in interviews just for some meager popularity and for hitting the headlines. Sad how some people are thirsty for fame and name. May God bless them,”

The young cricketer then added hashtags 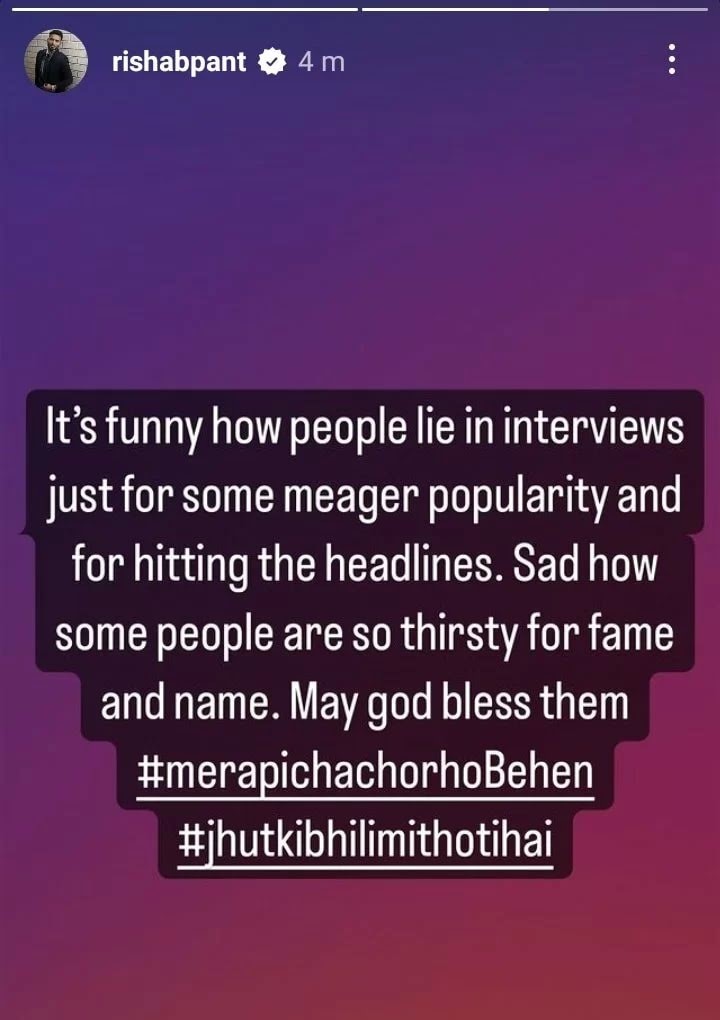 However, he deleted the story a few minutes later.

Their controversy is not new to anyone. Both of them don’t leave a chance to mock each other. A few years ago, when media reports said that Urvashi claimed she was dating Rishabh, the cricketer not only blocked her but posted pictures with his girlfriend on social media.