It has already been justified and proved over and over again that Indians have the most varied and tastiest food ever. Indians and food is a couple that is bound in holy matrimony and can neither survive without the other. Thus, being extremely particular of our food choices, we would surely not stay shut if someone raises a finger at our delicacies. Recently, a British professor was given a lesson over social media for calling Idli the most boring food to have ever been present.

Idli are the most boring things in the world. https://t.co/2RgHm6zpm4

This tweet caught the eye of Congress MP and Indian Politician, Sashi Tharoor son, Ishan Tharoor. He then shared the same stating that this is one of the offensive.

I think I've encountered the most offensive take on Twitter. https://t.co/jRb2xI3mX1

Soon enough the same was noticed by Shashi Tharoor himself, who stated that Edward might be a challenged person to feel this way. He tweeted, “Yes, my son, there are some who are truly challenged in this world. Civilisation is hard to acquire: the taste & refinement to appreciate idlis, enjoy cricket, or watch ottamthullal is not given to every mortal. Take pity on this poor man, for he may never know what life can be.” take-ups

Yes, my son, there are some who are truly challenged in this world. Civilisation is hard to acquire: the taste & refinement to appreciate idlis, enjoy cricket, or watch ottamthullal is not given to every mortal. Take pity on this poor man, for he may never know what Life can be. https://t.co/M0rEfAU3V3

Soon after Edward was enraged to see the way he was getting thrashed and came forward to clear out that he generally likes South Indian food and it is just one dish that he does not like.

But Edward soon geared up and took a jab at Shashi.

Oh no, I feared that the world's most famous idli evangelist would see this after @ishaantharoor tweeted it! Coincidentally 'this poor man' is currently re-reading one of your books which I've set my students to read for a class next week! pic.twitter.com/30vqyrEQQk

Edward, however, did not want to stop there, he prepared a full-blown south-Indian meal following that and tweeted the same with a message.

Having accidentally enraged the entirety of South India (and its omnipresent diaspora) on twitter, it was only right to order idlis for lunch. I'm very sorry to report that my unpopular – or "blasphemous", as some have said – opinion remains unchanged. #sorrynotsorry https://t.co/qx2VRJw6EO pic.twitter.com/TmIvxNWaYx

He also added the fact that the Sambar and the Chutney were a delicacy later.

For the record, the sambar and chutney were good. And I still adore almost all of the wonderful cuisine of south India. Thanks to Newcastle's Malayali restaurant, Ury, for the idlis. I may not have finished them, but the delicious fish curry, dosa and payasam were devoured.

We all get the fact of going all defensive about our favourites, but to be honest it is not completely correct to slam and judges a person based on their individual likes and dislikes. Do you agree?

Procrastinating bibliophile in love with words and everything artistic.
Previous Ajay Devgn Slammed Haters For Trolling His Daughter Nysa
Next A Troller Trolled Rakul Preet for Her Dress on Twitter, She Gave A Cracking Reply 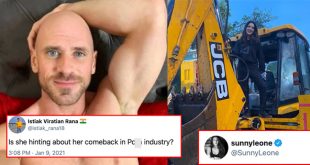 Sunny Leonne has been one of the biggest icons of Bollywood for some time now. …