Goofy side of Ashneer Grover

Co-founder of BharatPe and Shark Tank India Judge Ashneer Grover is in US these days and he has posted pictures from his trip to California along with his wife Madhuri Jain Grover on Instagram. Ashneer also shared videos of him playing golf, posing differently & goofily  on a car, and travelling across California. The couple travelled to the US in May.

one of his photos grabbed a lot of attention amongst fans as Ashneer was seen standing on the footboard of green car with one hand holding the car while spreading out the other one. Putting on  white Tee, black and white shorts and matching slippers Ashneer is looking super cool and dashing in that picture. His smile was like cherry on the top and he captioned the pictures  saying:

“Flying in to the weekend!” 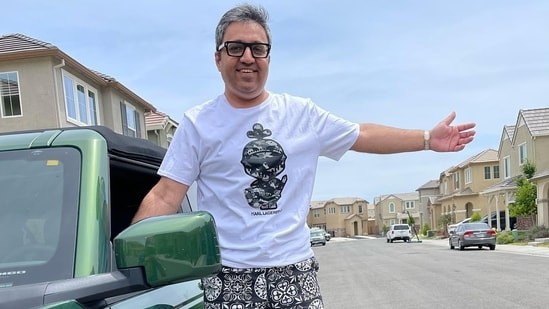 And Just like any other brother and sister , Ashneer’s sister Aashima Grover teased him. she commented:

“See I was right, this is indeed American version of Thar, iss par log harkatein bhi waisi hi karte hain (people do such antics on this).”

Ashneer replied to her saying:

“@aashimagrover this car is custom made for Rohit Shetty.”

Ashneer was standing on footboard of the car. 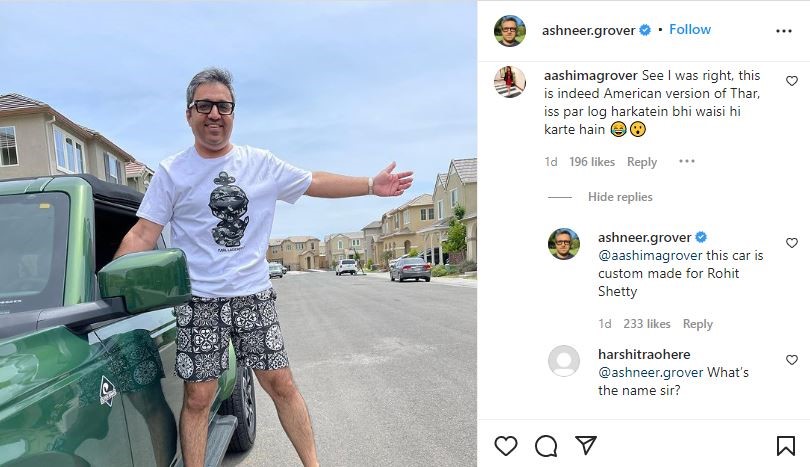 Ashneer received a lot of likes and comments on this photo and reacting to it, one of his  fan wrote, “Tough competition to Ranveer Singh.” Another person commented, “This shark is flying high.” A fan also asked, “Saying this to BharatPe?”

Ashneer also shared a video in which he was playing golf. He captioned it saying ,

“Top Golf ! The most fun way of at least getting the swing right and tracking where the ball went on the screen. Hard part for us Indians is to overcome the natural gully cricket swing action for hitting the sixer every time !!”

Moreover, He also posted a photo with his wife Madhuri as they posed near a lake. Ashneer captioned the post,

“Day out in Sacramento! Great weather and very chilled out place. It’s the capital of California but a small town at heart of it.” Madhuri is wearing a pink T-shirt and a salmon skirt in the picture.

Ashneer also posted a short videe as he drove near Lake Tahoe. He captioned the post,

“Driving on this ridge road in Lake Tahoe is pure bliss – high up you get to see the lakes on both sides of the road. It is surely a bit unnerving to drive given the steep drop on either side.”

Fans witnessed a different side of Ashneer i.e. the fun and goofy side apart from the strict and straightforward one.