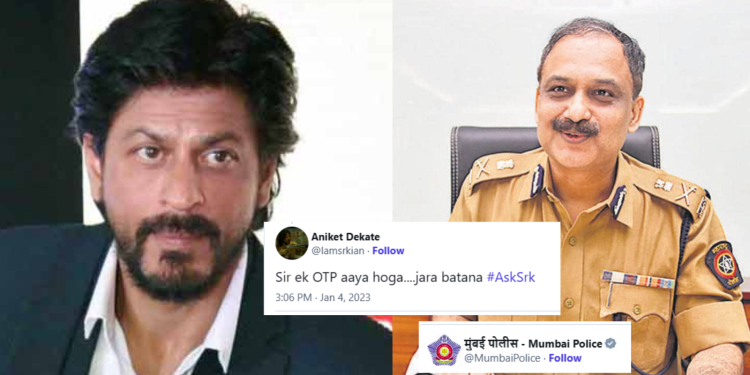 Recently, Bollywood superstar Shah Rukh Khan was seen initiating the #AskSRK session on Twitter again as a part of the promotions for his upcoming film Pathaan. The actor tweeted, “#AskSrk let’s do. Only fun answers nothing serious to begin the year with…”

#AskSrk let’s do. Only fun answers nothing serious to begin the year with…

He instantly received thousands of tweets and replies asking him about his inspiration for fitness, the ‘purpose’ of watching the film, the postponement of the release, and even his monthly income.

However, one tweet grabbed a lot of attention as a fan tried to be witty and promptly asked SRK for an OTP, raising the alarms on Twitter.

As usual Shah Rukh had a brilliant reply for the user Aniket Dekate who asked the superstar,

“Sir, an OTP has arrived, just tell me”. Responding to the question Shah Rukh said,

Moreover, everyone got surprised when The Mumbai Police responded to that tweet. The Mumbai Police were not in the mood to deal with the user’s shenanigans! They were quick to take cognizance of his witty tweet and replied with “100”.

Police across the country are constantly raising awareness of cyber fraud and asserting that sharing an OTP with anyone may lead to unfavorable consequences.  Internet and Mumbai Police have certainly grown to be a marvelous combination over the years.

Meanwhile, speaking of the film, it is suggested that the trailer for Shah Rukh Khan-starrer ‘Pathaan’ will be released by the makers on January 10, 2023, and the film be released later this month.

The film also stars Deepika Padukone and John Abraham in the lead roles and has been directed by Siddharth Anand. The movie will be released in Tamil, Telugu, and Hindi languages on January 25, 2023.